Click Here for Tickets
This 1946 comedy is about a business tycoon, Harry Brock, who brings his Broadway chorus girlfriend, Billie Dawn, to Washington, D.C. on a business trip. Here, he intends to convince those in Congress to vote his way. When he realizes that Billie doesn't fit in well with Washington society, which might hinder his business dealings, he hires journalist Paul Verrall to tutor her. Although reluctant at first, Billie proves to be a quick learner about American history and the founding of this country, which leads her to ask questions about Brock's intentions in Washington.  Can trouble be far behind?

"When this play was written, it was a fable, but after Watergate, it became a documentary." - playwright Garson Kanin
​ 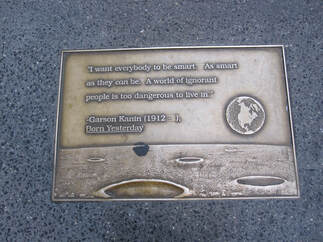 Many of you know I like to ice skate at Bryant Park.  I like skating here for several reasons, one of which is, it gives me great pleasure to know I’m skating over stacks and stacks of books.  Another is, it’s near Library Way.

If you approach the New York Public Library, facing the lions (named Patience and Fortitude), from Park Avenue on 41st Street, don’t forget to look down on the sidewalk.  That’s where you’ll find “Library Way.”  Here, you’ll see beautiful bronze plaques designed by Gregg LeFevre, involving images inspired by the texts of 45 writers from 11 countries spanning 20 centuries.  This project started in the early 1990s with librarians submitting many quotes and the final quotes determined by experts that included those at “New Yorker” magazine.  If you can't see the plaques in person, visit https://www.flickr.com/photos/42394240@N07/sets/72157626738626135/

Three of the 45 writers quoted have been represented on ELTC’s stage: Emily Dickinson, Mark Twain, and Kate Chopin.  A fourth will be joining them: Garson Kanin.  The quote, from Born Yesterday, reflects his personal belief: “I want everybody to be smart. As smart as they can be. A world of ignorant people is too dangerous to live in.”  Kanin died in 1999, a year after the plaque was placed.
​

PLAYWRIGHT GARSON  KANIN
Garson Kanin, born on November 24, 1912 in Rochester, NY, wrote plays, essays, screenplays, short stories, novels, memoirs, songs, and a libretto, and directed plays, musicals, documentaries and films. His father, a real estate developer, bought a movie theater, and Kanin began studying silent films – sometimes frame by frame, in the projection booth. He dropped out of high school to work as a stock clerk at Macy’s, but soon immersed himself in performing, forming his own band, Gar Kay and the Red Peppers, featuring himself on clarinet. He worked as a comedian in the Catskills and at the Eltinge Theater in New York, attended and graduated from the American Academy of Dramatic Arts, and made his Broadway debut in 1933 in Little Ol’ Boy. He also performed in radio and had a recurring role on The Goldbergs.
In 1936, he directed his first Broadway play, Hitch Your Wagon. That same year he become a production assistant to Samuel Goldwyn in Hollywood. After a year, he began working for RKO Studios where he directed his first feature film, A Man to Remember, written by Dalton Trumbo. He directed seven more films at RKO, including My Favorite Wife. In 1941, Kanin was drafted into the U.S. Army’s Film Unit. In 1942, Kanin married stage and film actress Ruth Gordon.
The military enlisted Kanin in the Office of Strategic Services (OSS), the precursor to the CIA, and sent him to the Supreme Headquarters of the Allied Expeditionary Force (SHAEF) in London. Kanin, with Carol Reed, co-directed General Dwight D. Eisenhower’s official record of the Allied Invasion, a documentary titled The True Glory. The True Glory was named Best Film of 1945 by the National Board of Review and won the Academy Award for Best Documentary that year.
Gordon’s earnings from her successful Broadway career, made it possible for Kanin to stay at Claridge’s while in London, instead of the barracks. It was here that Kanin wrote a draft of Born Yesterday. It opened on Broadway at the Lyceum Theater on February 4, 1946. Kanin directed the play, which catapulted the then-unknown Judy Holliday to stardom. The hit comedy ran for four years (1649 performances), still holding the record for longest-running play at that theater.
Kanin and Gordon wrote four screenplays, three of which–A Double Life (1948), Adam’s Rib (1949) and Pat and Mike (1952)–were nominated for Academy Awards for Best Original Screenplay. Meanwhile, Kanin was also directing Gordon in Broadway plays, including The Leading Lady and A Very Rich Woman, both written by Gordon as well as The Smile of the World, which he wrote in 1949.
Throughout the 50’s, Kanin wrote several screenplays, including It Should Happen to You, which starred Judy Holliday and Jack Lemmon. In 1955, he directed the Broadway and London premieres of The Diary of Anne Frank.
Also, in 1955, his first short story was published: “A Day at a Time” for Good Housekeeping. He continued to write stories, essays, and books, including Remembering Mr. Maugham and Tracy and Hepburn: An Intimate Memoir.
In the 1960’s, for Broadway, he directed Do Re Mi, which he adapted from his novella, with music and lyrics by Jule Styne, Betty Comden and Adolph Green. He directed Robert Redford in Sunday in New York and Henry Fonda in A Gift of Time, which Kanin adapted from the memoir Death of a Man by Lael Wertenbaker. In 1964, he directed Barbra Streisand as Fanny Brice in Funny Girl. That same year, he created the TV series Mr. Broadway. In 1978 Kanin and Gordon co-wrote the CBS TV movie Hardhat and Legs. The miniseries based on his novel Moviola was broadcast in 1980.
In 1985, he was inducted into The Theater Hall of Fame. That same year, Ruth Gordon, died in Martha’s Vineyard.
During his last decade Kanin reaped the rewards of a successful artistic career. For many years he served on the Dramatists Guild Council and as first Vice-President of The Players Club. The Authors League of America elected him its President. Born Yesterday enjoyed a Broadway revival and national tour, starring Madeline Kahn and Ed Asner. Numerous organizations honored his life and career: he received the William Inge Lifetime Achievement Award (1987); the Writers Guild of America’s Valentine Davies Award (1989); The Players’ Edwin Booth Lifetime Achievement Award (1996); and the Mr. Abbott Award from the Society of Stage Directors and Choreographers (1997).
In 1990 Kanin married the actress Marian Seldes. He died on March 13, 1999 in New York City.
Part of Library Way, there is a bronze plaque on the 41st Street sidewalk, heading towards the New York Public Library. The quote, from Born Yesterday, reflects Garson Kanin’s personal belief: “I want everybody to be smart. As smart as they can be. A world of ignorant people is too dangerous to live in.”