BRINGING HISTORY TO LIFE:  A Year in the Trenches

The creation of this script received partial funding from The NJ State Council on the Arts, and the NJ Historical Commission. Written by James Rana and Directed by Gayle Stahlhuth, who was also Dramaturg, it was based on Charles Edward Dilkes’ book Remembering World War I: An Engineer’s Diary of the War, and other historical sources.

​A YEAR IN THE TRENCHES is highlighted on NJTV's STATE OF THE ARTS
First aired on NJTV on Sunday, September 16, 2017, you can see it now ​by clicking here.
THE STAGED-READING VERSION TOURED IN 2017 TO:
* The Bickford Theatre in Morristown, NJ, sponsored by the NJ Theatre Alliance’s “Stages Festival” on March 21
* The Ocean County Public Library in Toms River, NJ, sponsored by the Ocean County Cultural and Heritage Commission, on April 28
* McGuire Air Force Base/Fort Dix on July 18, to commemorate the 100th Anniversary of its founding
* Ocean County College Theater on October 17: Two performances for over 900 students grades 4 through 8. The students were completely engaged throughout and had excellent questions to ask the performers after the show.  (Below see photo of the performance and letters)
* The New Jersey State Museum in Trenton on October 21

“The World War I Centennial offers us an opportunity to reexamine a period of history that seems absolutely relevant to today. Questions regarding how the U.S. should engage with the rest of the world, the role of women in society, the treatment of immigrants, the nature of modern warfare, and the meaning of patriotism challenged citizens of 1917, just as they bedevil us now. A Year in the Trenches shines a spotlight on how some New Jerseyans confronted these issues and brings us greater understanding of both the past and present. The Historical Commission is delighted to join with the New Jersey State Council on the Arts in exploring this pivotal period of our history through this engaging new play.”
- Sara R. Cureton, Executive Director, New Jersey Historical Commission
​
“We are proud to co-commission this new play with the New Jersey Historical Commission. Bringing the struggles of the past to life on stage is one of the countless ways that art can bring empathy and understanding to the challenges of the present. And by doing so, it paves the way to a better future.”
-  Nick Paleologos, Executive Director, New Jersey State Council on the Arts 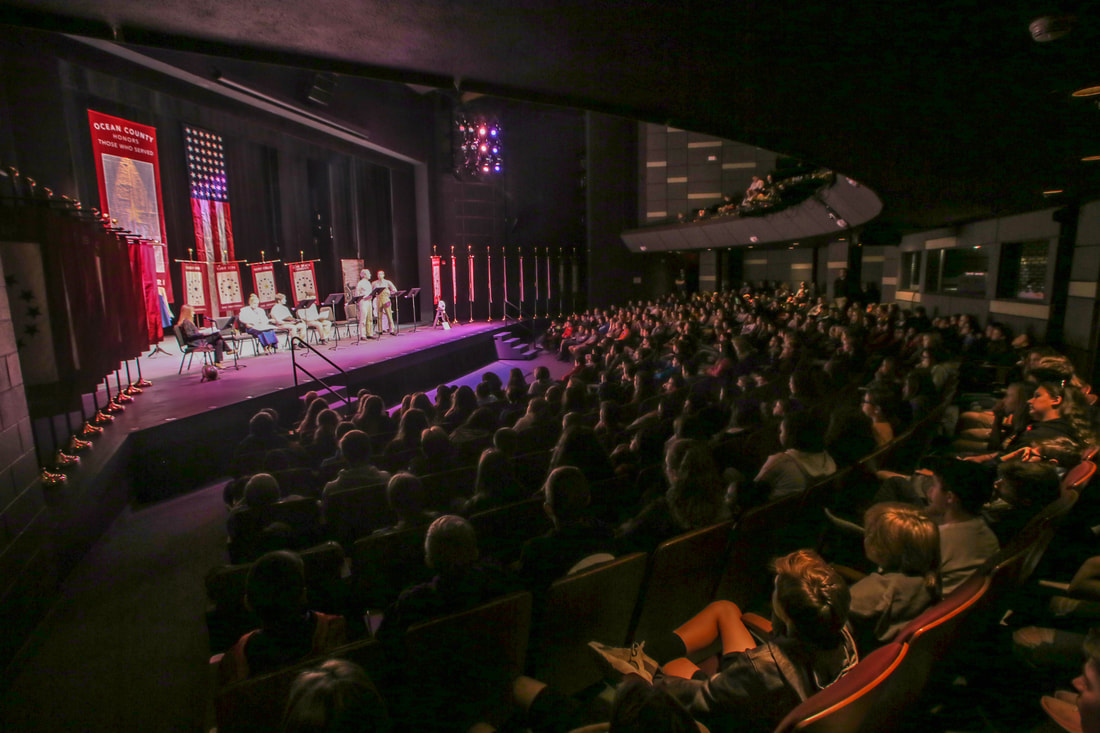 After our two performances of the staged-reading version at Ocean County College, ELTC received this letter via e-mail on October 20, 2017 . . .

A YEAR IN THE TRENCHES

On behalf of the students who attended the play A Year in the Trenches at the Jay and Linda Grunin Center we would like to say thank you. All of the students who attended were selected by their Social Studies teachers for exceptional disposition or academic success. Every student was impressed, engaged and delighted to be able to experience not only the play, but simply a trip to a college campus as well as a professionally run theatre. The impact is immeasurable, the experience was endearing to the minds of these kids who simply do not receive these experiences that help shape them into intelligent well rounded cultured students.
As a teacher of Social Studies for 16 years I cannot speak enough about the delivery of content through conversation, dialogue and action that was spot on flawless. I am already devising a plan to mimic the plays format by having students research and write dialouge about a certain time period in History. The interaction of all the characters and their experiences is what I hope to be able to have the students replicate and perform.  Here at Lakewood we have a plethora of talented students who have hidden talents with limited exposure. This experience and hopefully more gives these kids hope, opportunity and a place to fuse their dreams with something concrete. We cannot thank you enough for including us in this experience. Below are a few typed thoughts from two of our students.

And what the students wrote about A YEAR IN THE TRENCHES . . . . .
​
Destiny Vasquez wrote . . .
The trip was about a play set during the 19th century. The actors were 4 soldiers, a lady in the telephone service and a nurse to help out the injured that were in the front lines. The nurse’s brother Adrian did not want her going to the front lines, because anything could happen to her. They sent letters to each other to make sure they were ok. The girls sang songs that were popular back then and meant something. In the end the actors explained everything they did and we got to ask them questions about what they were doing.

Anahi Alejo wrote . .
“Remembering World War I”
It was pretty interesting getting to know the life of various people from that era. Although it was a bit confusing at times, because the actors were all changing from one character to another, it still was great. My favorite story was the one about the lady who worked for the AT&T phone company, answering calls on the switchboard.  Another story I enjoyed is the tale of the nurse who wanted to help the soldiers, but her brother didn’t want her to go, because she had to go to France!  In the end she winds up going and she sends letters to her brother. I honestly really enjoyed the trip.