christmas with harte and
​o. henry

click here to purchase tickets
"Gayle Stahlhuth is a master storyteller. . . . Every Christmas, Stahlhuth, who has already spent a year overseeing
​East Lynne's season and outreach programs, always has one more gift to give - her storytelling. . . .
The whole evening filled me with hope - and ready to put up the decorations."
- from Dottie Knapp's review  for "Exit Zero" ​
​ 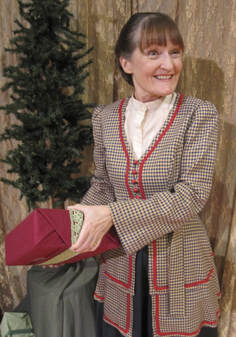 ​     “There are three cousins, a half-uncle, a kind of brother-in-law – that is, the brother of my sister-in-law’s second husband – and a niece.  That’s six.  They’ve written to me for money, seeing my name in the paper ez hevin’ made a strike.  But I’ve never met ‘em, and I want to give them a Christmas party, and I’d like you to run it for me,” explained Dick Spindler to the widow Huldy Price.
“Run it for you!  Man alive!  What are you thinking of?”  responded the widow.
How this Christmas party comes together in the town of Rough and Ready, who ends up coming, and how they all behave, is all part of the fun in “Dick Spindler’s Family Christmas” by Bret Harte.
Meanwhile, another miner, Cherokee, wants to share his new-found fortune with old friends and all the children in Yellowhammer - a town whose youngest citizen uses a safety razor.  How the townsfolk try to make Cherokee’s Christmas plans come true is at the core of O. Henry’s humorous and insightful story, “Christmas by Injunction.”
Francis Bret Harte (1839-1902) became editor of “The Overland Monthly” in California in 1868, where his stories "The Luck of Roaring Camp" and “The Outcasts of Poker Flat” were first published. In 1871, he signed a contract with “The Atlantic Monthly” to write  stories in one year for $10,000, the most that had ever been offered an American writer up to that time.
O. Henry (William Sydney Porter, 1862-1910) was charged with embezzling while working at a bank in Texas. In prison, he adopted his pseudonym and wrote “A Retrieved Reformation” which was an immediate success.  He was released in 1901 after having served only three years of his prison term, and moved to Manhattan where most of his stories are set. When he died at age 47, he had 23 cents in his pocket. To this day, he is honored by having the most renowned annual collection of American short stories named after him.

Gayle Stahlhuth is no stranger to writing and performing one-person shows. Her first one was​ Lou: The Remarkable Miss Alcott, which premiered at St. Leo University in Florida in 1981. She performed both two-act and one-act versions throughout the country in various theaters, museums (including several times at Alcott’s Orchard House in Concord, MA), and schools, obtaining gigs through her own endeavors and through Arthur Shafman Artists International. The last time she performed Lou was in 2007 as part of ELTC’s Mainstage Season.
Other one-person shows have been based on Catharine Beecher and Edna Ferber, Kate Chopin’s The Awakening, the writings of Mark Twain, and her own autobiographical Goin’ Home. For her writing and/or performing, she’s been awarded commissions from The Smithsonian Institution, the Missouri and Illinois Humanities Councils, Theatreworks USA and other theaters, and grants from the NJ Humanities Council, the NYS Council on the Arts, and the Mid-Atlantic Foundation for the Arts. This has all led to interesting productions and venues, i.e., The National Portrait Gallery commissioned her to write a play about Dorothea Lynn Dix.  Titled Not Above A Whisper, she and her husband, Lee O’Connor, then took the play to a variety of venues sponsored by various mental health associations throughout the country.
She has performed off-Broadway (Manhattan Theatre Club, etc.) in national tours (Cabaret, Fiddler, etc.), regional theater (Gateway Playhouse in Long Island, etc.), television (various soaps, etc.), radio (commercials and Voice of America), and on the Chautauqua Circuit.
Her plays have had staged readings in NYC, and been performed at such places as the NYC International Fringe Festival, The Samuel French One-Act Festival, Arvada Center in Denver, the Phoenix Theater in Indianapolis, Pennsylvania Stage Company, and at several universities.
In the early 1980s, she was a pioneer in the artist-in-residence (AIR) movement to put art back into public schools, and is on the AIR rosters for NY, NJ, UT, and WY. For her work, she was selected as one of only two hundred artists from all arts disciplines to be listed in the "Directory of Community Artists" published by the National Endowment for the Arts.
Throughout the years she has directed-stage managed-designed/set lights-designed/built sets-designed/built costumes for a variety of off-off Broadway shows, NYC cabarets, festivals and touring productions; started a dinner theater in Billings, MT; produced a Medieval Festival at The Walters Art Gallery in Baltimore; made and rebuilt elephant and llama blankets for Ringling Brothers Circus; been an Emmy Awards’ judge in the field of broadcast news; and worked undercover for white collar crime for a NYC detective agency.
The production of A Year in the Trenches in the fall of 2017, marked her 100th production for ELTC since she became the company’s artistic director in 1999. These productions include 23 world premieres and 10 NJ premieres, and she directed over half of them. Her direction has been praised in “The Philadelphia Inquirer,” “The New York Times,” and “The Wall Street Journal,” as well as in local newspapers.
Gayle served on the board of ELTC from 1987-1997, and at various times was President, Vice-President, Secretary, and Treasurer. From 1990-2002 she was a Council Member of The Episcopal Actors’ Guild, serving on the Membership Committee, and, at various times, was Chair of the Finance Committee, Secretary, and Treasurer. EAG, founded in 1923, was the first organization to help professional actors, and still continues to do so regardless of religious affiliations. Since 2000, she has served on the board of the New Jersey Theatre Alliance, serving on a variety of committees, but mostly with emerging professional theaters throughout the Garden State.
She is an Active Member of the Dramatists Guild, SAG-AFTRA, Actors’ Equity Association, and the National League of Professional Women, who honored her in 2016 for her accomplishments as a theater professional.