Our popular radio-style adventures are back for the 11th year, with two mysteries and two great detectives. 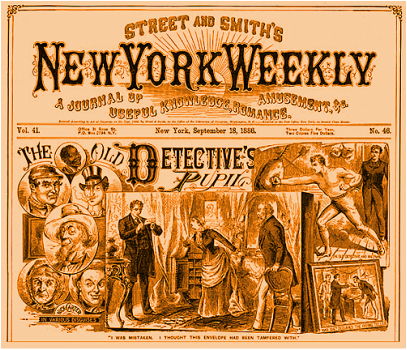 ​﻿Before television and the Internet, people sat eagerly by the radio to hear the latest dramas and comedies.  Many radio shows were performed in front of an audience as they were being sent live, across the "airways."  ELTC invites you to be part of our radio audience as we take you back to those days of live sound effects, commercials, and actors portraying several roles to make the tales come to life.

This year, we're offering two mysteries back-to-back on the same night, with the same cast of seven going from Holmes’ Victorian England, to Carter’s Manhattan during World War II.

In The Adventure of the Red-Headed League, Sherlock Holmes must learn why Ezekiah Hopkins, of Lebanon, PA, left money in his will to start a club for only men with red hair. In The Voice of Crime, the illusive "Vox" announces he will pay Nick Carter if Nick discovers where his next robbery will occur. The Red-Headed League is adapted from the original Sir Arthur Conan Doyle story by Gayle Stahlhuth.  Aired on April 18, 1943, The Voice of Crime is the original script for the 2nd Carter radio show, written by﻿ Walter Gibson and Edward Gruskin, who wrote numerous detective scripts for the radio. ﻿

While Sherlock Holmes was solving crimes in England, Nick Carter was busy in Manhattan. Carter first appeared in The Old Detective’s Pupil published in Street and Smith’s “New York Weekly” in 1886 – a year before Sir Arthur Conan Doyle’s Holmes’ first caper, A Study in Scarlet.  Carter, like Holmes, was very bright and enjoyed portraying many disguises to help him dig up information in the quest for justice. The Old Detective’s Pupil, or The Mysterious Crime of Madison Square was written by John Russell Coryell (1851-1924), based on an idea by Smith of Street and Smith publishers. It was actually a book, and appeared in thirteen installments in “The New York Weekly.” Coryell wrote two other Carter novels, keeping the series going through 1889. The series became so popular that in 1915, Nick Carter Weekly became Street and Smith’s detective story magazine. The books continued, written by a variety of people, from 1933-1990, with Carter changing with the times. In 1964, the series changed from Nick Carter: Master Detective to Nick Carter: Killmaster to compete with James Bond and other international super spies.

In October, 1930, the Sherlock Holmes radio series began with The Speckled Band, adapted by Edith Meiser, who proposed the Holmes radio series to NBC. At first NBC passed on the idea for lack of a sponsor, so Meiser found one: G. Washington Coffee. Sir Arthur Conan Doyle died in the summer of 1930, but his estate entrusted the development of the series to Meiser and NBC. Meiser, also an actress, wrote the series by herself for a dozen years, and with help through most of the 1940s. No audiences were allowed during the early broadcasts. Famous actor/playwright William Gillette, at age 77, starred in the radio show’s premiere. It was he who had created the first stage adaptation based on the writings of Doyle in 1899, under the title Sherlock Holmes. Although he’d played the role over 1,000 times, he was uncomfortable with the radio format and Clive Brook replaced him for the next two broadcasts. Richard Gordon played the role from November 10, 1930 through May of 1933, and again in 1936, and Leigh Lovell and Harry West played Dr. Watson. From 1939 to 1946, Holmes and Watson were played by Basil Rathbone and Nigel Bruce. At the same time, they played these roles in 16 films. The Sherlock Holmes radio series continued through 1950.

In April, 1943, the Nick Carter radio series was launched with The Strange Dr. Devolo, and lasted through 1955 with only one actor playing Carter: Lon Clark. The Nick Carter Detective character, copyright, and trademarks are owned by Conde Nast. Used with permission.﻿

THE CAST
​
​​​Mark Edward Lang (Vincent Spaulding / Nick Carter) ​Favorite roles include Captain Scott in Terra Nova and Jack in The Importance of Being Earnest (Hilton Head Playhouse), The Actor in ELTC’s The Guardsman, seven roles in the Irish comedy Stones in his Pockets (Open Stage of Harrisburg), Kosti in Welcome Home Marian Anderson (Off-Broadway and tour); and ELTC’s Biography, Zorro, Christopher Bean, The Poe Mysteries, Dulcy, Butter and Egg Man, Why Marry?, The New York Idea, Voice of the City and You and I (Best Actor Jacoby Award, 2007). He’s performed Shakespeare, Moliere, and new works in NYC and on tour; as well as theater workshops and directing (including ELTC’s Anna Christie).  He has co-starred with his wife Alison J. Murphy in his play Lunt and Fontanne: The Celestials of Broadway, in San Antonio and New York City.  His new project is Zelda and Scott: Love Letters, based on the Fitzgeralds' correspondence. Member AEA and SAG-AFTRA.

﻿Robert LeMaire (Sound Effects/Inspector Ramler) performed in several East Lynne productions including To the Ladies, You and I, The Dictator (2001 & 2010), Sherlock Holmes, Three Miraculous Soldiers, Anna Christie, The Late Christopher Bean, and The Ransom of Red Chief. He’s worked sound effects and performed in ELTC’s Holmes Adventures: The Speckled Band, The Blue Carbuncle, and The Norwood Builder. Other performance work includes portraying Herr Drosselmeyer in Cape May Stage's Nutcracker and in appearing in Vistas of Democracy, a video in NJ Network Public Television's Educational NJ Legacy Series. You may catch his shoulder in the History Channel's Civil War Terror. He has directed for the Ocean City High School Drama Guild. ﻿

﻿Lee O'Connor (Sherlock Holmes/Announcer/Scubby) portrayed Holmes in ELTC’s William Gillette’s Sherlock Holmes, and has portrayed Holmes in all of ELTC's NBC radio-style adventures. He also appeared in ELTC’s The Leach Diaries, The Dictator, The Life and Adventures of Santa Claus, Dick Spindler’s Family Christmas, the staged readings of Henry Sawyer and the Civil War and Our American Cousin, and is a storyteller for ELTC’s “Tales of the Victorians.” Other performing work includes The Odd Couple in Saigon while serving in Vietnam, and traveling throughout the country with his wife, Gayle Stahlhuth, in a two-hander written by Stahlhuth, Not Above A Whisper. Commissioned by The National Portrait Gallery, it was about Dorothea Lynde Dix, who fought for the rights of the indigent mentally ill. Aside from being ELTC’s Technical Director since 1999, he has worked at a variety of regional theaters, and his work in NYC includes Radio City Music Hall, Irish Rep, Primary Stages, and special events for Dancers Over 40.  Member AEA.﻿

﻿Thomas Raniszewski (Duncan Ross/Peter Jones/Riley/Elevator Operator) recently performed in the world premier of Dying Like Ignacio at the Workshop Theater's Main Stage Theater in New York. His recent East Lynne Theater Company’s plays include Strictly Dishonorable and the 2015 world premier of Huckleberry Finn. Among his other plays at ELTC, have been Berkeley Square and It Pays to Advertise. In 2014, he portrayed Tommy in Rachel Handler's 2015 short feature Disabilidates which premiered at the Hollyshorts Film Festival in Hollywood. He received critical acclaim for his role as Warren in the 2011 and ‘12 Philadelphia productions of Tom Jacobson's award-winning psychological drama The Twentieth-Century Way. In May, 2013, he reunited with East Lynne's 2006 cast of Why Marry? for a staged-reading performance in New York City at the prestigious Players Club. Member AEA. ﻿

﻿Gayle Stahlhuth has performed off-Broadway (Manhattan Theatre Club, etc.) in national tours (Cabaret, Fiddler, etc.), regional theater (Gateway Playhouse in Long Island, etc.),  television (various soaps, etc.), radio (jingles and Voice of  America), and on the Chautauqua Circuit. Since becoming  ELTC’s Artistic Director in 1999, she has produced 80 different plays/musicals (some returned for another season), including 19 world premieres and 9 NJ premieres, and directed over half of them. Her adaptations for ELTC include Tales by Twain, that also ran at Surflight Theatre; Spoon River, based on the famous Anthology by Edgar Lee Masters, and The Ransom of Red Chief based on O.Henry's classic tale. She’s been awarded commissions from The National Portrait Gallery, the Missouri and Illinois Humanities Councils, and grants from the NJ Humanities Council, the NYS Council on the Arts, and the Mid-Atlantic Foundation for the Arts. For several years she was a judge for the Emmy Awards in the field of broadcasting. She is an Active Member of the Dramatists Guild, SAG-AFTRA, and AEA. ﻿

Fred Velde (Dr. Watson/Sneak/Radio Announcer/Altaumount) is a native New Yorker and has been part of  the New York theater scene for over thirty years. He has been a member of The Harbor Theatre since 1995 and is currently a member of The Workshop Theater. His theatre credits include The Price of Genius on Broadway, Sex by Mae West, Off-Broadway, and Traveling Souls in Moscow as a member of The Phoenix Ensemble. For ELTC, he played Dr. McPhail in Rain, Chris in Anna Christie, Mr. Forbes in Dulcy, Detective Dupin in The Poe Mysteries, and Dr Watson in The Copper Beeches, The Speckled Band, and The Blue Carbuncle. As well as theater, he has appeared in film, soaps, Comedy Central and commercials. He is a member of AEA and SAG-AFTRA.