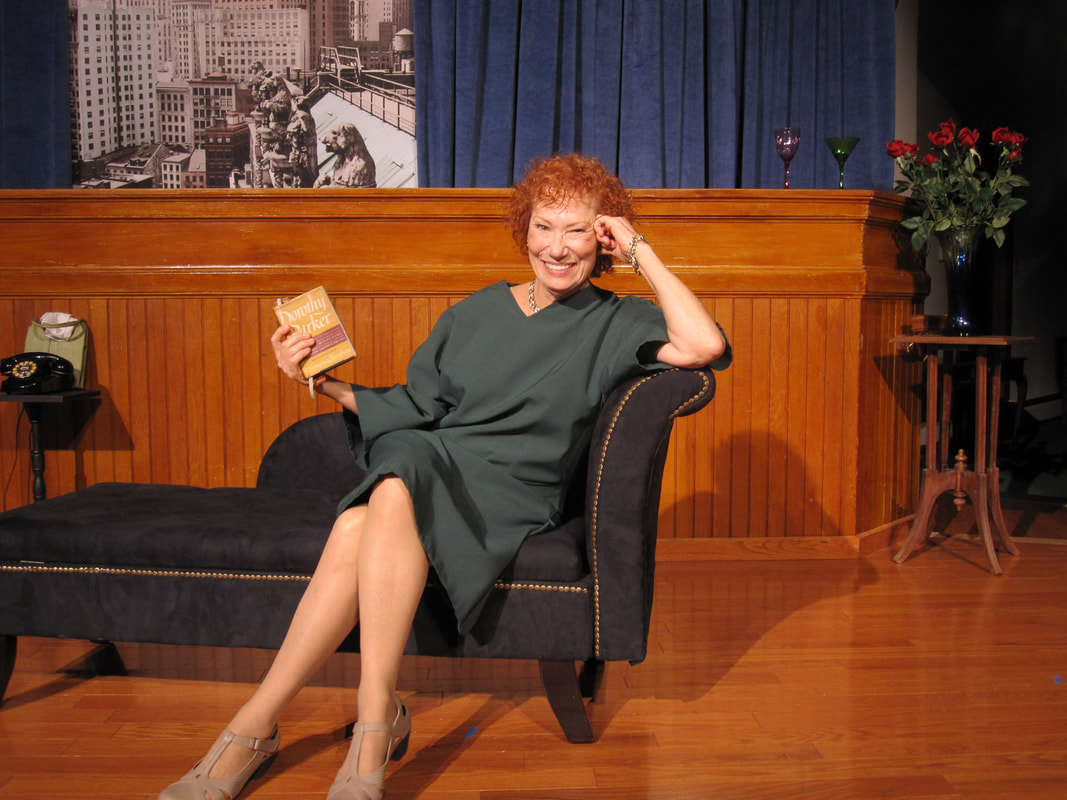 “When you see DOROTHY PARKER: A CERTAIN WOMAN,
expect an evening of listening, learning and laughing."
- Carol Emmens, "The Cape May Star & Wave"​

"I'd rather have a bottle in front of me than a frontal lobotomy."
- just one of Dorothy Parker's bon mots​
PURCHASE TICKETS HERE
“A Telephone Call" is about a woman who waits anxiously for a man to call.  She counts to five hundred by fives, seeks God's help, and wishes the man were dead, only to change her mind.  "After all," she says, "it's silly to go wishing people were dead just because they don't call you up the minute they said they would.  Maybe the clock's fast."

​In 2011, Suzanne Dawson first performed this famous monologue in ELTC's world premiere The World of Dorothy Parker, created by Gayle Stahlhuth.  For ELTC in 2021, Suzanne is performing her favorite Parker monologues, stories and poems, including "A Telephone Call."

Dorothy Parker (1893-1967) was a poet, journalist, critic, screenwriter, human rights activist and a philanthropist. She was called a wit, a wise-cracker, and a nut. But above all, she was a Certain Woman. The first edition of The Portable Dorothy Parker was selected by Alexander Woollcott in 1944 as the fourth in a series of volumes intended for soldiers overseas.  It has never been out of print.
Parker recently made the news when her gravestone was unveiled on August 23, 2021 in Woodlawn Cemetery in The Bronx. Due to the efforts of the Dorothy Parker Society, her ashes were moved from the NAACP headquarters in Baltimore, to the Bronx where she is now next to her parents and grandparents. On it, is the final stanza of her 1925 poem "Epitaph for a Darling Lady:" It reads: "Leave for her a red young rose. Go your way, and save your pity. She is happy, for she knows That her dust is very pretty."
COVID SAFETY PROTOCOLS: Click Here for the Updated Information
​
WHO'S WHO

﻿Suzanne Dawson (Storyteller) has played leading roles off-Broadway in: CBS Live, The Last Musical Comedy, The Great American Backstage Musical, and the revival of New Faces of ’52.  Her regional credits include Sylvia at Florida Studio Theatre, The Snowball and A Little Night Music at Buffalo Studio Arena, Carnival at The Alliance in Atlanta, and Rumors at Paper Mill Playhouse here in NJ. She toured with Rumors, and opposite Gavin Macleod in Last of the Red Hot Lovers. ELTC shows include: To the Ladies!, Alice on the Edge, The Butter and Egg Man, Berkeley Square, The World of Dorothy Parker, Dulcy, Ruth Draper’s Company of Characters, The Legend of Sleepy Hollow, Zorro!, and Arsenic and Old Lace. Member AEA. ﻿﻿﻿

﻿James Rana (Researched and Compiled Dorothy Parker: A Certain Woman) East Lynne credits include: Nothing Matters, A Year in the Trenches (playwright), Dracula, Strictly Dishonorable, Huckleberry Finn (playwright), Zorro! (playwright/performer), The Legend of Sleepy Hollow (playwright), The Poe Mysteries (playwright/performer), and Sherlock Holmes’ Adventure of the Norwood Builder.  Ensemble Studio Theatre, Pan Asian Rep, Luna Stage, The Shakespeare Theatre, Royal Shakespeare Co. (UK), Classical Theatre of Harlem, Actors Shakespeare Co., Contemporary American Theatre Festival, Coney Island USA, Comedysportz, Worth Street Theatre, Shakespeare & Co., Princeton Rep, Globe Neuss and Bonn Biennale (Germany). Film/Television: Swim Little Fish Swim, The War Within, A Girl Like You With A Boy Like Me, The Assassin, Law & Order: SVU, Chicago Fire, Third Watch, One Life To Live, As the World Turns, Conan O’Brien. Radio: Poe: A Celebration (wrote and narrated) for NPR. Stage Adaptations: From The Earth To The Moon (workshop: Tri-State Actors Theatre), A Christmas Carol (Actors Shakespeare Co.).  In 2017, he performed in Off-Broadway's The Government Inspector starring Michael Urie. In the fall of 2017, he began rehearsals for Broadway’s The Band's Visit, and performed several times in the role of the Band's Leader, originally performed by Tony Shalhoub, and other roles.  When this Tony Award winning show closed on Broadway in April 2019, he began performing in The National Tour.  James received his MFA from Trinity Rep and is a member of Actors’ Equity Association, SAG-AFTRA, and the Dramatists Guild..

﻿Gayle Stahlhuth (Dramaturg/Director) has performed off-Broadway (Manhattan Theatre Club, etc.) in national tours (Cabaret, Fiddler, etc.), regional theater (Gateway Playhouse in Long Island, etc.),  television (various soaps, etc.), radio (jingles and Voice of  America), and on the Chautauqua Circuit. Since becoming  ELTC’s Artistic Director in 1999, she has produced over 100 different plays/musicals (some returned for another season), including 21 world premieres and 10 NJ premieres, and directed over half of them. Her adaptations for ELTC include Tales by Twain, that also ran at Surflight Theatre; Spoon River, based on the famous Anthology by Edgar Lee Masters, and The Ransom of Red Chief based on O.Henry's classic tale. She’s been awarded commissions from The National Portrait Gallery, the Missouri and Illinois Humanities Councils, and grants from the NJ Humanities Council, the NYS Council on the Arts, and the Mid-Atlantic Foundation for the Arts. For several years she was a judge for the Emmy Awards in the field of broadcasting. She is a member of the Dramatists Guild, SAG-AFTRA, AEA, and the League of Professional Women, who honored her in 2016 for her work in theater. ﻿

﻿﻿﻿Tom Byrn (Stage Manager) has performed with ELTC since 2009, including in two solo shows, Will Rogers U.S.A. (2018), and Mr. Lincoln, which was part of ELTC's 2015 and 2016 seasons and toured to Bloomsburg Theatre Ensemble in PA. Tom was also in ELTC’s Within the Law, He and She, Biography, The Dictator, and the world premiere of The Ransom of Red Chief. In 2018 and 2019, he directed Silent Sky and Summerland for ELTC. Tom has acted at various theaters in the Philadelphia area, including, People's Light & Theatre and the Delaware Theater Company, and at various other theaters in PA, NY, and OH. Currently an Associate Member, for eleven years, Tom was a full-time Ensemble Member of the Bloomsburg Theatre Ensemble in Bloomsburg, PA.  He is co-editor of the trade paperback Letters to the Editor (Simon & Schuster) and is a member of Actors' Equity and the Lincoln Center Director's Lab. He resides in the Susquehanna River Valley of central PA with his wife and daughter. To Lee....

​Amanda Brinlee (Production Assistant) is a recent graduate of Fairleigh Dickinson University, a small business owner, stage manager, and performer. Since receiving her Bachelors of Arts in Acting in 2020, she performed in ELTC’s virtual reading of Something to Vote For; worked backstage and onstage in Vaudeville Variety, Tales in the Backyard and Poe by Candlelight; assistant stage managed Dorothy Parker: A Certain Woman, and assistant directed The Summer Student Workshop’s The Reluctant Dragon. When she is not working in theatre, she is running her small business, Amanda Brinlee Designs on Etsy, and raising her daughter.  Amanda would like to thank ELTC and Gayle for this continued opportunity, as well as her husband and the rest of her family for their love and support.

Mark Edward Lang (NYC Backdrop) a director, actor, playwright and graphic/web designer based in New York City, has been involved with ELTC since 2001.  Mark has performed in many East Lynne Theater productions over the years, including The Rainmaker and this summer's Who Am I This Time?; and has directed O'Neill's Anna Christie for ELTC, along with this fall’s Possessing Harriet.  He has been the graphic designer for ELTC since 2004 (posters, ads, etc.), along with scene design and scene painting for a few shows, including The Poe Mysteries.  Other graphic and web design clients include the corporate training company Leadership Masters and Curran Wealth Management. More information about his company is at www.TBEDesign.com.