CLICK HERE TO WATCH A SHORT PROMO: FOOTAGE FILMED IN A STUDIO ON FEBRUARY 11

ELTC guests who attended our 2019 Gala are still talking about Jenna's performance,
and we're very happy that she's premiering her new show with our company.

This full-out performance was filmed in a studio with all musicians present.

​This isn’t a traditional Judy Garland tribute — there will be no impersonation here. Instead, the cleverly
curated playlist of classics and forgotten gems will leave Judy fans and Judy novices alike tapping their feet as
Jenna pays homage to one of her favorite divas. Featuring music from The Wizard of Oz, Easter Parade,
Judy Live at Carnegie Hall, Judy at The Palace, The Judy Garland Show, and more.
You won’t want to miss Jenna’s spirited celebration of Judy’s legacy.
"Forget your troubles" and join us for a wonderful time!

Tickets are $15
PURCHASE TICKETS
Those who purchased tickets for opening night will receive an e-mail from ELTC that will give you the url to watch the show at 8:00 PM
For the other three nights, patrons will receive tickets directly from Ticketleap.
On the e-mailed ticket is a button to hit near ​showtime to watch the show at 8:00 PM.
​
You'll have 24 hours to view Get Happy!, and you may pause and even stop the show and return later.
We strongly recommend that you connect your computer to a flat screen tv with an HDMI cable so you
​can see the show ​on a larger screen with better sound, and even use Closed Caption if you like.
SONG LIST
Opening Medley: Get Happy/Steppin’ Out with my Baby/Puttin’ on the Ritz/We’re off to see the Wizard/Get Happy
It Never Rains But What It Pours
Any Place I Hang My Hat Is Home
You Made Me Love You
The Trolley Song/Zing Went the Strings of My Heart
I'm Always Chasing Rainbows/Somewhere Over the Rainbow
Singin’ in the Rain
Joint Is Really Jumpin' Down at Carnegie Hall/I Got Rhythm
That’s All
You Go to My Head
A Lot of Livin’ to Do
The Man That Got Away
Hey, Look Me Over
That’s Entertainment
Encore: Moon River​ 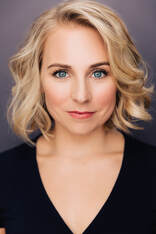 Joshua Zecher-Ross (Music Director/Arranger/Orchestrator) has worked on hundreds of productions and concerts in New York and around North America as a pianist, music director, supervisor, conductor, arranger, and electronic music designer. Broadway: Be More Chill (conductor sub). Recently: The Louder We Get directed by Lonny Price at Theatre Calgary and Cheek to Cheek with the Omaha Symphony Orchestra. Joshua is a musical theatre instructor at the NY Film Academy and at Actor Therapy, a cantorial soloist and frequent synagogue musician in the NY area, and he holds a Bachelor of music in vocal performance from the Steinhardt School at New York University.

Caitlin C. Fahey (Dramaturg) is a dramaturg and award winning cabaret singer. Dedicated to the preservation of the American Songbook, her work combines research with performance, two of her favorite things. She seeks to empower her clients to create work they are proud of so that they stop waiting for permission to share their gifts with the world. Her debut cabaret show Party of One premiered at Don’t Tell Mama, winning the 2017 BroadwayWorld Cabaret Award for best debut and a 2018 MAC Award nomination. In 2020, she was nominated for a BroadwayWorld Cabaret Award for Best Vocalist for her work in Blake Allen’s An Evening Series at Green Room 42.