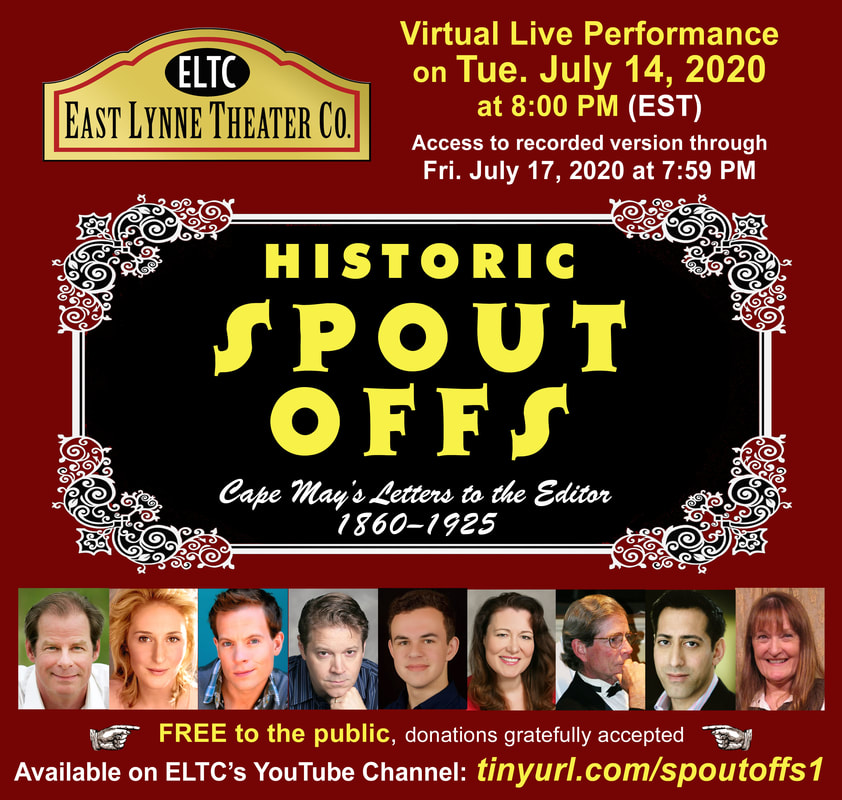 From crowded sidewalks to stealing chickens, from the Civil War to leap-year love,
citizens throughout history seem always to have an opinion. Funny, touching,
and quirky, this collage of the old Cape May (1860-1925) is as current as ever!

MUSIC:
"At Dororthy's Fantastic Seaside Arcade" written by Thomas Raniszewski, with George Mesterhazy on piano.
ELTC thanks Mr. Raniszewski for allowing us to use his composition.

We wish to express our gratitude to the Performers’ Unions:
ACTORS’ EQUITY  ASSOCIATION
AMERICAN GUILD OF MUSICAL ARTISTS
AMERICAN GUILD OF VARIETY ARTISTS
SAG-AFTRA
through Theatre Authority, Inc. for their cooperation in permitting the Artists to appear on this program.​
MAKE A DONATION
The Playwright and Cast

﻿﻿﻿Tom Byrn has performed with ELTC since 2009, including in two solo shows, Will Rogers U.S.A. (2018), and Mr. Lincoln, which was part of ELTC's 2015 and 2016 seasons and toured to Bloomsburg Theatre Ensemble in PA.  Tom was also in ELTC’s Within the Law, He and She, Biography, The Dictator, and the world premiere of The Ransom of Red Chief.  In 2019, he directed Summerland and in 2018, Silent Sky for ELTC.  In the past few years, Tom also performed in The Importance of Being Earnest and One Slight Hitch by Lewis Black (Cider Mill Playhouse, Endicott, NY), Jane Austen Readings (Franklin Stage Company, Franklin, NY); and Circle Mirror Transformation by Annie Baker (The REP Stage, Baltimore/D.C.). He has acted at various theaters in the Philadelphia area, including, People's Light, Interact, Lantern, Act II Playhouse, and at various other theaters in PA, NY, and OH. Currently an Associate Member, for eleven years, Tom was a full-time Ensemble Member of the Bloomsburg Theatre Ensemble in Bloomsburg, PA, where he acted, directed, wrote, and taught.  He is co-editor of the trade paperback Letters to the Editor (Simon & Schuster) and a member of the Lincoln Center Director's Lab. He is a graduate of Vassar College, and a member of Actors’ Equity Association. Tom resides in the Susquehanna River Valley of central PA.

​Veronique Hurley was in ELTC's The Rainmaker, Sherlock Holmes Adventure of the Blue Carbuncle, Silent Sky and Biography. Off Broadway Theatre Credits include: The Tempest, As You Like it, Twelfth Night, Hunting and Gathering (The Glass Eye), Women are crazy because men are Assholes  (Cherry Lane Theatre); Regional Credits Include: Noises Off, To Kill A Mockingbird, Christmas Carol, (The Hartford Stage Company) The Straight Marriage Plays, Moon Over Buffalo (Cape May Stage), Around the World in 80 Days (won best ensemble, Broadwayworld.com), Bunnicula and Charlotte's Web (Playhouse on Park). Member AEA.

Mark Edward Lang Theater and corporate training events have taken him to 35 U.S. states and around the world; including trips to Malaysia, Tanzania, Copenhagen and Istanbul.  Favorite roles include Alfred Lunt in the biographical drama Lunt and Fontanne: The Celestials of Broadway (FringeNYC and Classic Theatre of San Antonio; also playwright), Captain Robert Scott in Terra Nova and Jack in The Importance of Being Earnest (Hilton Head Playhouse), The Actor in ELTC’s The Guardsman (with wife Alison J. Murphy), seven roles in the Irish comedy Stones in his Pockets (Open Stage of Harrisburg), Kosti in Welcome Home Marian Anderson (Off-Broadway and tour); and ELTC’s The Rainmaker, Ah, Wilderness!, Biography, Zorro!, Christopher Bean, The Poe Mysteries, Dulcy, Butter and Egg Man, Why Marry?, The New York Idea, Voice of the City, The Dictator (2001), Four by Four and You and I (Best Actor Jacoby Award, 2007). He’s performed Shakespeare, Molière and new works in NYC and on tour; as well as theater workshops and directing, including ELTC’s Anna Christie.  Graduate of Vassar College.  Member AEA, SAG-AFTRA.

Andrew Lofredo just finished his sophomore year at the University of Central Florida pursuing a BFA in Musical Theatre and was most recently seen in the ensemble of Theatre UCF’s Titanic. Other past roles include Hugo in Tuck Everlasting and Lucas in The Addams Family.

﻿Alison J. Murphy has appeared in New York productions of Lunt and Fontanne: The Celestials of Broadway (with her husband Mark Edward Lang), Aurora Leigh, The Wound of Love, and ELTC’s Why Marry? at the historic Players Club.  Past ELTC productions in Cape May include The Late Christopher Bean, The Dictator, The New York Idea, Voice of the City, Four by Four, Why Marry?, You and I, Dulcy, and The Guardsman.  For Access to Art in Cape May, she portrayed Rosalind in As You Like It and Margaret Roper More in Bound by Truth, by Sheila Rinear.  She has also worked with American Stage Company and Shakespeare in the Garden, in productions of Cloud Nine, Elephant Man, Extremities, A Midsummer Night's Dream, Othello, The Tempest and Twelfth Night.  Film: The Love of My Life (Frank Faralli, director).  She also teaches acting workshops. Member AEA.

LEE O'CONNOR portrayed Holmes in ELTC’s William Gillette’s Sherlock Holmes, and has portrayed Holmes in most of ELTC's NBC radio-style adventures. He also appeared in ELTC’s The Leach Diaries, The Dictator, The Life and Adventures of Santa Claus, Dick Spindler’s Family Christmas, the staged readings of Henry Sawyer and the Civil War and Our American Cousin, and is a storyteller for ELTC’s “Tales of the Victorians.” Other performing work includes The Odd Couple in Saigon while serving in Vietnam, and traveling throughout the country with his wife, Gayle Stahlhuth, in a two-hander written by Stahlhuth, Not Above A Whisper. Commissioned by The Smithsonian, it is about Dorothea Lynde Dix, who fought for the rights of the indigent mentally ill. Aside from being ELTC’s Technical Director since 1999, he has worked at a variety of regional theaters, and his work in NYC includes Radio City Music Hall, Irish Rep, Primary Stages, and special events for Dancers Over 40. Member AEA.﻿

﻿JAMES RANA East Lynne credits include: A Year in the Trenches (playwright), Dracula, Strictly Dishonorable, Huckleberry Finn (playwright), Zorro! (playwright/performer), The Legend of Sleepy Hollow (playwright), The Poe Mysteries (playwright/performer), and Sherlock Holmes’ Adventure of the Norwood Builder.  Ensemble Studio Theatre, Pan Asian Rep, Luna Stage, The Shakespeare Theatre, Royal Shakespeare Co. (UK), Classical Theatre of Harlem, Actors Shakespeare Co., Contemporary American Theatre Festival, Coney Island USA, Comedysportz, Worth Street Theatre, Shakespeare & Co., Princeton Rep, Globe Neuss and Bonn Biennale (Germany). Film/Television: Swim Little Fish Swim, The War Within, A Girl Like You With A Boy Like Me, The Assassin, Law & Order: SVU, Chicago Fire, Third Watch, One Life To Live, As the World Turns, Conan O’Brien. Radio: Poe: A Celebration (wrote and narrated) for NPR. Stage Adaptations: From The Earth To The Moon (workshop: Tri-State Actors Theatre), A Christmas Carol (Actors Shakespeare Co.).  In 2017, he performed in Off-Broadway's The Government Inspector starring Michael Urie. In the fall of 2017, he began rehearsals for Broadway’s The Band's Visit, and performed several times in the role of the Band's Leader, originally performed by Tony Shalhoub, and other roles.  When this Tony Award winning show closed on Broadway in April 2018, he began performing in The National Tour. James received his MFA from Trinity Rep and is a member of Actors’ Equity Association, SAG-AFTRA, and the Dramatists Guild.

﻿Gayle Stahlhuth has performed off-Broadway (Manhattan Theatre Club, etc.) in national tours (Cabaret, Fiddler, etc.), regional theater (Gateway Playhouse in Long Island, etc.),  television (various soaps, etc.), radio (jingles and Voice of  America), and on the Chautauqua Circuit. Since becoming  ELTC’s Artistic Director in 1999, she has produced over 100 differerent plays/musicals (some returned for another season), including 21 world premieres and 10 NJ premieres, and directed over half of them. Her adaptations for ELTC include Tales by Twain, that also ran at Surflight Theatre; Spoon River, based on the famous Anthology by Edgar Lee Masters, and The Ransom of Red Chief  based on O.Henry's classic tale. She’s been awarded commissions from The National Portrait Gallery, the Missouri and Illinois Humanities Councils, and grants from the NJ Humanities Council, the NYS Council on the Arts, and the Mid-Atlantic Foundation for the Arts. For several years she was a judge for the Emmy Awards in the field of broadcast news. She is a member of the Dramatists Guild, SAG-AFTRA, AEA, and the League of Professional Women, who honored her in 2016 for her work in theater. ﻿