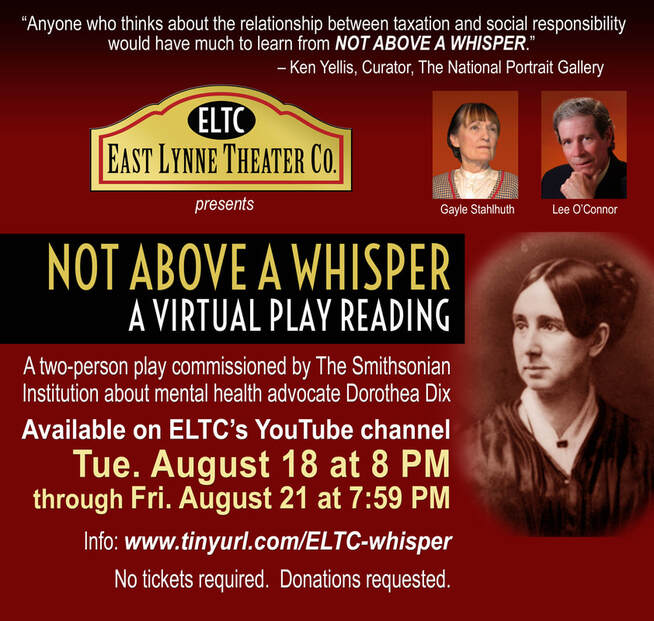 The script was commissioned by The Smithsonian Institution and premiered at The National Portrait Gallery in Washington, D.C.  in 1983, with Gayle Stahlhuth and Lee O'Connor performing.  During the next four years, they toured NOT ABOVE A WHISPER to mental health organizations throughout the country.
​
​In 1841, while teaching a Sunday school class at the East Cambridge House of Correction in Massachusetts, Dorothea Lynde Dix observed that not only were mentally ill incarcerated with the criminals, but that they were mistreated. She then then traveled for two years throughout Massachusetts, documenting the horrendous treatment of the indigent mentally ill in institutions and private homes where people were paid by the state to take care of them. In January 1843, she submitted her report to the Massachusetts Legislature. 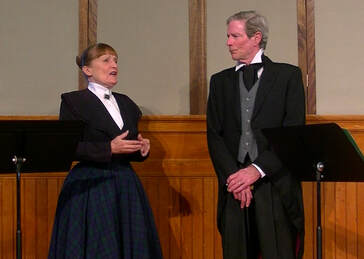 Gayle Stahlhuth and Lee O'Connor during rehearsal of "Not Above a Whisper"
The play takes place in the State Legislature's building in Boston, down the hall from where the Legislature actually meets.  Dorothea Lynde Dix awaits the outcome of the bill she has proposed to help the indigent mentally ill.  A lawyer, Charles Dearing, opposed to her findings, joins her.  It's Saturday afternoon, February 25, 1843.  ​

As we celebrate the certification of the 19th Amendment, 100 years ago, on August 26, 1920, it is important to note how women had to make their voices heard in government, prior to when they were allowed to vote.  Dix spent two years documenting treatment of the mentally ill just in Massachusetts, however, it was Dr. Howe, who read her findings before the State Legislature.  No woman, at that time, was allowed to deliver such requests in person.  Dix traveled to every state to compile evidence about the horrific conditions for the mentally ill, and in every state, she had to find a man to speak for her in State Legislatures.  Fortunately, there were men like Dr. Howe, who believed in her cause.  In 1843, he married Julia Ward, who later wrote "The Battle Hymn of the Republic."      ​
​
BIOS

LEE O'CONNOR portrayed Holmes in ELTC’s William Gillette’s Sherlock Holmes, and has portrayed Holmes in most of ELTC's NBC radio-style adventures. He also appeared in ELTC’s The Leach Diaries, The Dictator, The Life and Adventures of Santa Claus, Dick Spindler’s Family Christmas, the staged readings of Henry Sawyer and the Civil War and Our American Cousin, and is a storyteller for ELTC’s “Tales of the Victorians.” Other performing work includes The Odd Couple in Saigon while serving in Vietnam, and traveling throughout the country with his wife, Gayle Stahlhuth, in a two-hander written by Stahlhuth, Not Above A Whisper. Commissioned by The Smithsonian, it is about Dorothea Lynde Dix, who fought for the rights of the indigent mentally ill. Aside from being ELTC’s Technical Director since 1999, he has worked at a variety of regional theaters, and his work in NYC includes Radio City Music Hall, Irish Rep, Primary Stages, and special events for Dancers Over 40. Member AEA.﻿

﻿GAYLE STAHLHUTH  has performed off-Broadway (Manhattan Theatre Club, etc.), in national tours (Cabaret, Fiddler, etc.), regional theater (Gateway Playhouse in Long Island, etc.), television, and radio. Other work involves directing cabaret shows in NYC, starting a dinner theater in Billings, MT, and creating a Medieval Festival at The Walters Art Gallery in Baltimore. A Year in the Trenches (2017), marked her 100th production for ELTC since becoming artistic director in 1999. As a playwright, her adaptations for ELTC include Tales by Twain, that also ran at Surflight Theatre; Spoon River, based on the famous Anthology by Edgar Lee Masters, The Ransom of Red Chief based on O.Henry's classic tale, and two radio-style scripts: The Adventure of the Norwood Builder and The Adventure of the Red-Headed League. .She’s been awarded commissions from The National Portrait Gallery, the Missouri and Illinois Humanities Councils, and grants from the NJ Humanities Council, the NYS Council on the Arts, and the Mid-Atlantic Foundation for the Arts. For several years, she was a judge for the Emmy Awards in the field of broadcast news. In 2016, she was honored for her work in theater by The National Association of Professional Women (NAPW). Member: AEA, SAG-AFTRA, Dramatists Guild, and NAPW. 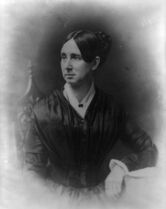 ​Dorothea Lynde Dix (1802-1887) was born in Hampden, Maine.  It is believed that both of her parents suffered from alcoholism, but whatever the reason, it was not a happy home, and when she was 12, Dix moved to Boston to live with her grandmother.  By age 14, she was teaching, and by 19, she had opened her own school for girls in Boston. Due to ill-health, on a doctor’s recommendation, she moved to England for two years in the mid-1830’s.
​In 1841, she was hired to teach a Sunday school class at the East Cambridge House of Correction in Massachusetts. It was here where she first observed the inhumane treatment of the mentally ill who were incarcerated with criminals. Dix then traveled for two years throughout the state, documenting the horrendous treatment of the indigent mentally ill in various situations. In January 1843, she submitted her report to the Massachusetts legislature.  She did not get everything she’d asked for, but a bill was passed to enlarge the Worcester Insane Asylum, due to her efforts.  She then began to travel throughout the country, documenting other wrongs done to the mentally ill, and submitted more findings to other legislatures.  Due to her work, fifteen states and Canada passed bills for better treatment and the creation of hospitals just for the mentally ill. In all, she was responsible for the building of 32 institutions in the United States alone.  While in Europe in 1854 - 1856, she convinced Pope Pius IX to visit mental institutions, and he saw to it that changes were made based on her recommendations.  One of her constant demands was the hiring of well-trained, compassionate personnel.
​     During the Civil War, she was the Superintendent of Army Nurses for the Union Army, headquartered in Washington D.C.  She was very particular who she hired, and was a tough taskmaster, pushing women nurses particularly to be as best as they could be.  After the war, she continued to advocate for formal training and more opportunities for women nurses.