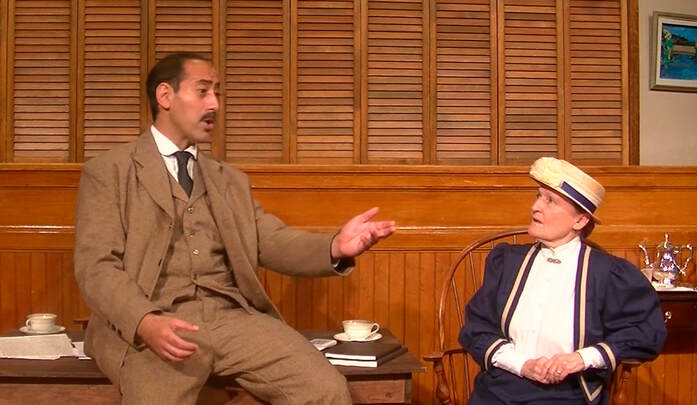 Monday, April 12 through Sunday, May 9
Every Day at 8:00 PM EST
Tickets are Free or Pay-What-You-Will (minimum $5.00)
Click Here for Tickets

The link to watch the show is in the e-mail sent to you by Ticketleap, through which you obtained the ticket.
Any problems, call ELTC at 609-884-5898 or e-mail eastlynneco@aol.com.
You'll have 24 hours to view Nothing Matters, and you may pause and even stop the show and return later.
We strongly recommend that you connect your computer to a flat screen tv with an HDMI cable so you
​can see the show ​on a larger screen with better sound, and even use Closed Caption if you like.

This play is only available virtually and was produced and is currently being presented under
an Actors' Equity Association's (AEA) contract - the 4th in the country awarded since mid-March 2020.
We were allowed to film the production with no audience.
The two actors and the stage manager are members of AEA.
Nothing Matters originally ran on YouTube four days a week from October 14 - November 21.

Actors' Equity Association ("AEA" or "Equity"), founded in 1913, is the labor union that represents more than 49,000 Actors and Stage Managers in the United States. Equity seeks to advance, promote and foster the art of live theatre as an essential component of our society. Equity negotiates wages and working conditions and provides a wide range of benefits, including health and pension plans, for its members. Actors' Equity is a member of the AFL-CIO, and is affiliated with FIA, an international organization of performing arts unions.

​This production is dedicated to the memory of Lee O'Connor, Stage Manager,
​who lost his battle with cancer on March 21, 2021. 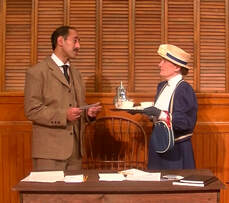 ​The setting is Ambrose Bierce's room at the Army Navy Club in Washington D.C. in early July, 1898.  Seeking Bierce’s advice on how to be a better writer, Mrs. Charles Wentworth intends to merely drop off samples of her poetry and stories, but ends up having tea and learning a great deal about the fascinating journalist. Bierce's philosophy was "Nothing Matters," but of course, many things mattered to him.  He was known as “the wickedest man in San Francisco” because he pursued the truth no matter who was the target of his journalist wit and humor. Having fought in the Civil War, his stories based on the experience are especially poignant, and “An Occurrence at Owl Creek Bridge” is considered by many scholars to be one of the best short stories ever written. His most famous book, The Devil's Dictionary, was named one of "The 100 Greatest Masterpieces of American Literature" by the American Revolution Bicentennial Administration in 1976, and “Wall Street Journal” columnist Jason Zweig wrote that it is “probably the most brilliant work of satire written in America. And maybe one of the greatest in all of world literature."

East Lynne Theater Company premiered NOTHING MATTERS in 2000 starring J. M. McDonough and Patti Chambers, before playwright/performer Dave Geible took it on the road with The Wyoming Shakespeare Company.  Dave has now visited the script again with ​director Gayle Stahlhuth, with James Rana now taking on the role of Bierce.

The actors, James Rana and Gayle Stahlhuth and stage manager Lee O'Connor, in this production are members of Actors’ Equity Association, the Union of Professional Actors and Stage Managers in the United States, in which there are currently over 51,000 members. 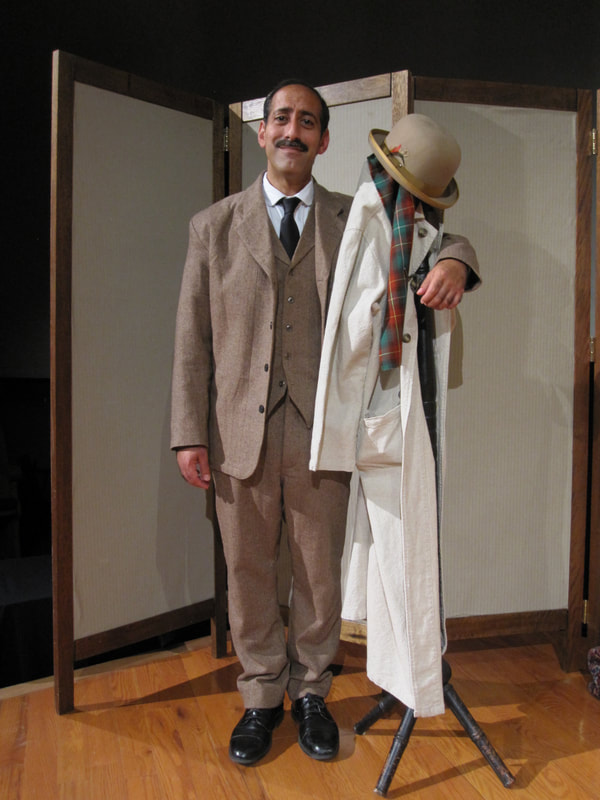 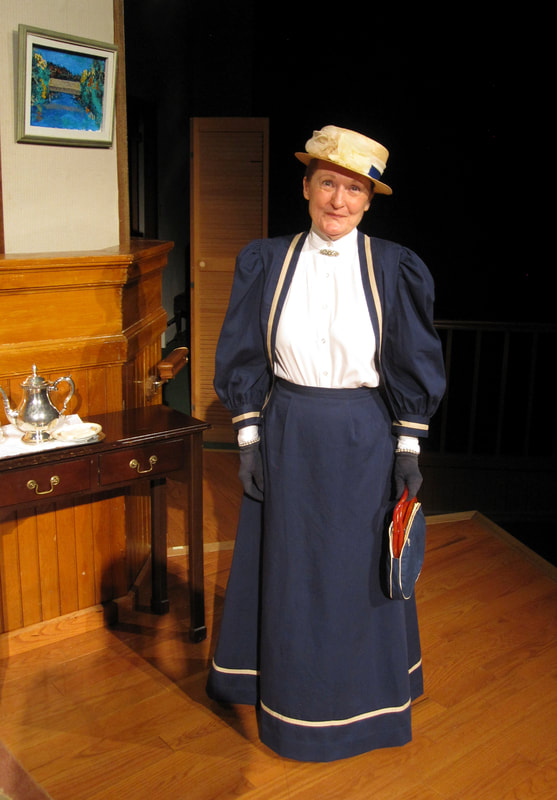 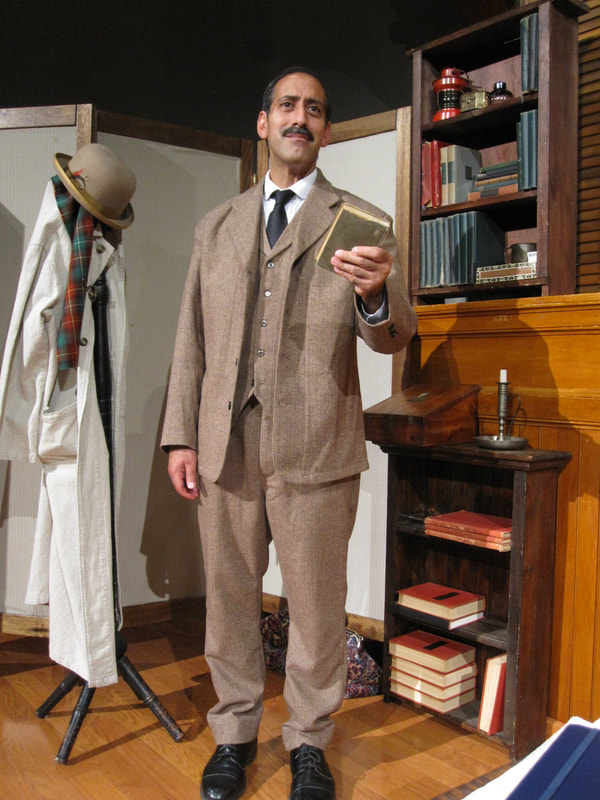 ﻿JAMES RANA (Ambrose Bierce) East Lynne credits include: A Year in the Trenches (playwright), Dracula, Strictly Dishonorable, Huckleberry Finn (playwright), Zorro! (playwright/performer), The Legend of Sleepy Hollow (playwright), The Poe Mysteries (playwright/performer), and Sherlock Holmes’ Adventure of the Norwood Builder.  Ensemble Studio Theatre, Pan Asian Rep, Luna Stage, The Shakespeare Theatre, Royal Shakespeare Co. (UK), Classical Theatre of Harlem, Actors Shakespeare Co., Contemporary American Theatre Festival, Coney Island USA, Comedysportz, Worth Street Theatre, Shakespeare & Co., Princeton Rep, Globe Neuss and Bonn Biennale (Germany). Film/Television: Swim Little Fish Swim, The War Within, A Girl Like You With A Boy Like Me, The Assassin, Law & Order: SVU, Chicago Fire, Third Watch, One Life To Live, As the World Turns, Conan O’Brien. Radio: Poe: A Celebration (wrote and narrated) for NPR. Stage Adaptations: From The Earth To The Moon (workshop: Tri-State Actors Theatre), A Christmas Carol (Actors Shakespeare Co.).
​      In 2017, he performed in Off-Broadway's The Government Inspector starring Michael Urie. In the fall of 2017, he began rehearsals for Broadway’s The Band's Visit, and performed several times in the role of the Band's Leader, originally performed by Tony Shalhoub, and other roles.  When this Tony Award winning show closed on Broadway in April 2018, he began performing in The National Tour.
James received his MFA from Trinity Rep and is a member of Actors’ Equity Association, SAG-AFTRA, and the Dramatists Guild.

﻿GAYLE STAHLHUTH (Amanda/Director) has performed off-Broadway (Manhattan Theatre Club, etc.), in national tours (Cabaret, Fiddler, etc.), regional theater (Gateway Playhouse in Long Island, etc.), television, and radio. Other work involves directing cabaret shows in NYC, starting a dinner theater in Billings, MT, and creating a Medieval Festival at The Walters Art Gallery in Baltimore. A Year in the Trenches (2017), marked her 100th production for ELTC since becoming artistic director in 1999. As a playwright, her adaptations for ELTC include Tales by Twain, that also ran at Surflight Theatre; Spoon River, based on the famous Anthology by Edgar Lee Masters, The Ransom of Red Chief based on O.Henry's classic tale, and two radio-style scripts: The Adventure of the Norwood Builder and The Adventure of the Red-Headed League. .She’s been awarded commissions from The National Portrait Gallery, the Missouri and Illinois Humanities Councils, and grants from the NJ Humanities Council, the NYS Council on the Arts, and the Mid-Atlantic Foundation for the Arts. For several years, she was a judge for the Emmy Awards in the field of broadcast news. In 2016, she was honored for her work in theater by The National Association of Professional Women (NAPW). Member: AEA, SAG-AFTRA, Dramatists Guild, and NAPW.

LEE O'CONNOR (Stage Manager) portrayed Holmes in ELTC’s William Gillette’s Sherlock Holmes, and has portrayed Holmes in most of ELTC's NBC radio-style adventures. He also appeared in ELTC’s The Leach Diaries, The Dictator, The Life and Adventures of Santa Claus, Dick Spindler’s Family Christmas, the staged readings of Henry Sawyer and the Civil War and Our American Cousin, and is a storyteller for ELTC’s “Tales of the Victorians.” Other performing work includes The Odd Couple in Saigon while serving in Vietnam, and traveling throughout the country with his wife, Gayle Stahlhuth, in a two-hander written by Stahlhuth, Not Above A Whisper. Commissioned by The Smithsonian, it is about Dorothea Lynde Dix, who fought for the rights of the indigent mentally ill. Aside from being ELTC’s Technical Director since 1999, he has worked at a variety of regional theaters, and his work in NYC includes Radio City Music Hall, Irish Rep, Primary Stages, and special events for Dancers Over 40. Member AEA.
﻿

DAVE GEIBLE (Playwright)  This is the second time East Lynne Theater Company has produced a version of Dave’s Nothing Matters with a two-character cast.  A single-actor version was performed in 2001 in Dave’s home state of Wyoming, with Dave playing Ambrose Bierce himself.  Dave has acted in a large number of plays over a large number of years and has finally reached the age, or beyond, of most of the characters he was asked to portray during that time.  He was a founding member of the Wyoming Shakespeare Company for fifteen years, playing The Porter in Macbeth, Cardinal Pandolph in King John, and Sir Toby Belch in Twelfth Night, Tartuffe, in the role in that Moliere play, and King Lear, in that play.  In younger years he played Polonius in Hamlet, Brabantio in Othello and The Fool in King Lear.  Some non-Shakespearean roles include: Nicely-Nicely Johnson in Guys and Dolls, Noah in Two by Two, Thomas Gray in The Boys in Autumn and Dr. McShary in The Cripple of Inishman.  He no longer acts but continues to pretend to write.

AMBROSE BIERCE (June 24, 1842 – circa 1914), whose poems and stories were published in various newspapers for over forty years, was opposed to hypocrisy and corruption. His most famous book, The Devil's Dictionary (1906), is a compilation of definitions in which he vents, with wit, his thoughts about society. His Civil War story "An Occurrence at Owl Creek Bridge” (1890) and his other supernatural tales are often compared to those of Edgar Allan Poe.  Known for getting at the truth, no matter who was harmed, he became known as "the wickedest man in San Francisco."
Bierce was born on a farm in Ohio, the 10th of 13 children.  The family moved to Indiana, where he attended high school for a year before becoming a printer’s devil (apprentice) in Warsaw, Indiana.  He attended the Kentucky Military Institute, and at the beginning of the Civil War, enlisted in the 9th Indiana Volunteers. He fought in a number of battles, including Shiloh and Chickamauga, and was seriously wounded in the Battle of Kennesaw Mountain in 1864. He received a merit of promotion to major in 1867.
After the war, Bierce traveled with a military expedition to San Francisco, where he left the army and began to write. In 1868, he became the editor of “The News Letter,” for which he wrote his famous "Town Crier" column.  His literary reputation quickly grew, and he became acquainted with Mark Twain, Bret Harte, and Joaquin Miller.
In December 1871 he married Mary Ellen Day, and from 1872 to 1875 the Bierces lived in England, where he wrote for the magazines “Fun” and “Figaro.” His sharp take on society garnered him the nickname "Bitter Bierce."  He published three books in England: The Fiend’s Delight (1872), Nuggets and Dust Panned Out in California (1872), and Cobwebs from an Empty Skull (1874).
Due to the English climate aggravating his asthma, the Bierces returned to San Francisco where he became associate editor of “The Argonaut.”  In 1879, he was manager at a placer mine in Rockerville in the Dakota Territory, but was thwarted by corrupt bosses, so left a year later.  For the next five years, he was editor of the “San Francisco Illustrated Wasp.”  In 1887 he began working for the “San Francisco Examiner” owned by William Randolph Hearst.  Here he continued his famous “Prattler” column that he had written for “The Argonaut” and “The Wasp.”
Bierce relocated to Washington, DC in 1896, where he continued to write. In 1913, he went to Mexico, then involved with a revolution led by Pancho Villa. What happened to him there, remains a mystery.