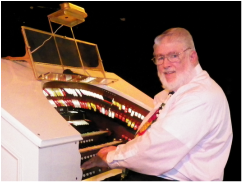 Wayne Zimmerman
​Silent films were accompanied by an organ, piano, and sometimes a full orchestra: the beginnings of film scoring as we know it.  From Charlie Chaplin, who scored his own films, to John Williams and Thomas Newman of today, the power of music accompanying a silent or a talking film cannot be undervalued.  Experienced composers know that music enhances the action and emotion, but never overshadow it.

Providing the live musical accompaniment is Wayne Zimmerman, who has been playing for ELTC's Silent Film presentations since 2011.  Wayne has played in a variety of venues from coast-to-coast and in Hawaii, regaling audiences with his silent-film accompaniment and concerts.  At varying times he’s served as organist at the Lansdowne Theatre in Lansdowne, PA, the Tower Theatre in Upper Darby, PA, the Brookline Theatre in Havertown, PA, and the Merlin Theatre in suburban Philadelphia. Recently, he served as president of the Delaware Valley Chapter of the American Theatre Organ Society, and currently serves on the board.  Past classics for ELTC include Wings, The Mark of Zorro, The Cabinet of Dr. Caligari and Nosferatu.
ABOUT PHANTOM OF THE OPERA (1925)
In 1908, Gaston Leroux wrote about a disfigured man who terrorizes the Paris Opera House and falls in love with the young leading lady.  Leroux was known for his cutting-edge horror stories, but if he were alive today, he would probably be amazed at all of the various adaptations of his Phantom of the Opera.  His story has been made into six films, and two musicals: one by Andrew Lloyd Webber, and the other by Arthur Kopit and Maury Yeston.  Leroux was impressed by the first film version, produced by Carl Laemmle, the head of Universal Pictures, in 1925, but didn’t live long enough to see any other incarnations.
The 1925 film stars Lon Chaney in the title role, with Mary Philbin, Norman Kerry, Arthur Edmund Carewe, and Gibson Gowland. Well-known reviewer Roger Ebert stated that “Phantom has “two elements of genius: It creates beneath the opera one of the most grotesque places in the cinema, and Chaney’s performance transforms an absurd character into a haunting one.”
This Phantom of the Opera opened two years before The Jazz Singer, in which Al Jolson spoke and sang on screen.
​

Lon Chaney was born on April 1, 1883 in Colorado Springs, CO, the son of deaf mute parents.  To be able to communicate with them, he used pantomime, sign language and facial expressions.
In 1901, he toured in The Little Tycoon, a play he co-wrote with his brother.  While in Oklahoma City, Francis Cleveland Creighton (Cleva), auditioned and was given a role in the show.  When the show moved on to other towns, Cleva, against her mother’s wishes, moved with it.
Cleva and Lon married and their son, Creighton Tull, was born in 1906. After a few more years of touring, they moved to California in 1910 in search a more secure lifestyle.  Lon found work as a stage manager, choreographer and actor, and Cleva became a popular singer in local cabarets.  Due mostly to jealousy, the marriage became strained.  In 1913, Cleva entered the Majestic Theater where Lon was working and attempted suicide by swallowing a vial of poison.  The poison damaged her vocal chords putting an end to her career and her marriage.
The scandal hurt Lon’s career on the stage, so he turned to the booming industry of silent films.  Between 1913 and 1930 he played more the 150 roles, frequently villainous and sometimes macabre, but almost always pathetic and moving.  Due to his abilities, he became known as “The Man of a Thousand Faces.”
Lon did everything he could to achieve the look and soul of the characters he portrayed.  In 1920, for The Penalty, he had his legs bound behind him in a harness, inserting his knees into leather stumps devised as artificial legs.  This cut off circulation to his legs resulting in broken blood vessels.  For The Hunchback of Notre Dame in 1923 he devised a hump and harness reportedly weighing in excess of 50 pounds, twisting his torso to feel the pain of Quasimodo.  His performance earned him worldwide fame.
In 1925, Lon created his own makeup for the role of Erik in The Phantom of the Opera.
When talking pictures began, Lon, like Charlie Chaplin, didn’t like them, and was one of the last silent screen stars to refuse speaking roles.  He claimed that his stock and trade “was in makeup and the art of pantomime.”
In 1930 he made his only talking film, a remake of the 1925 The Unholy Three.  He played a ventriloquist, using five different voices, proving that talking pictures would be no problem for him.  Unfortunately, shortly after the film was released, he died from a throat hemorrhage on August 26, 1930. The world mourned his passing.  He was a one-of-a-kind actor, and the characters and makeup he created continue to inspire artists today.