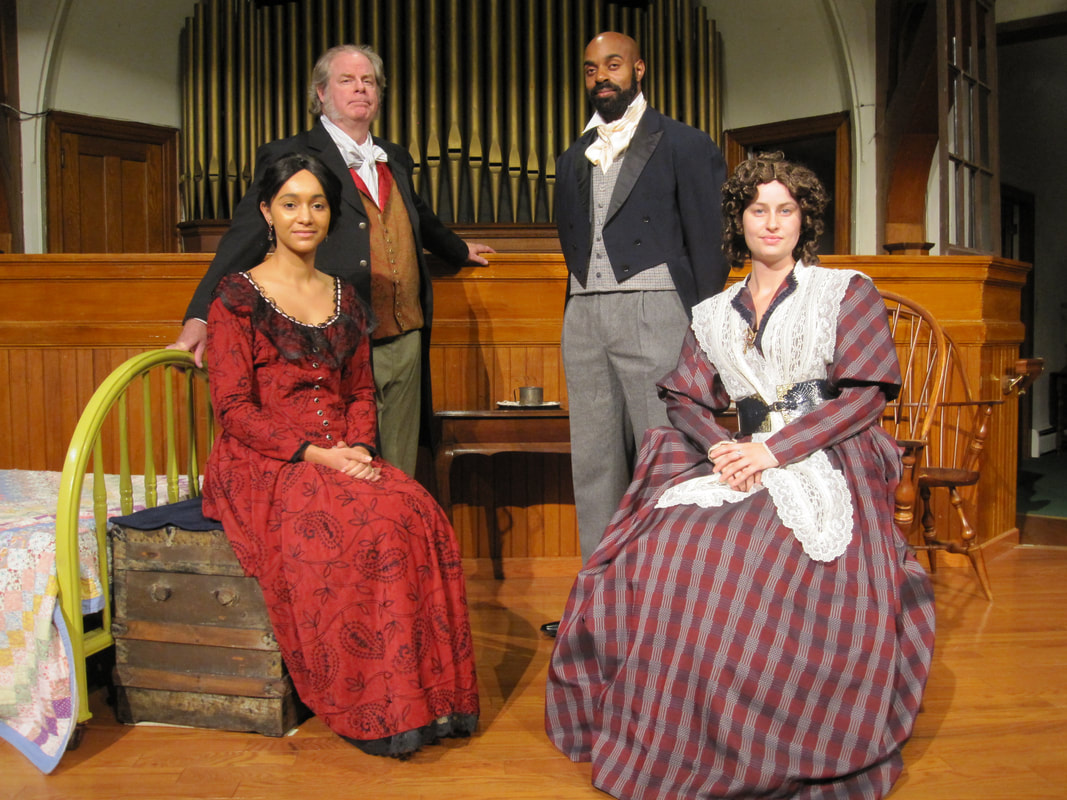 Wednesday, September 21: An after-show party at The Harriet Tubman Museum - and Kyle Bass will be there, too!

Friday, October 7: After-show Q&A and book-signing reception with playwright Kyle Bass
PURCHASE TICKETS HERE
In 1839, in Peterboro, NY, Thomas Leonard, a freed slave, helps Harriet Powell escape from her Southern owner who is visiting the area. While hiding in an attic, a price on her head, waiting to be taken to Canada in the dead of night, Harriet is with abolitionist Gerrit Smith and suffragette Elizabeth Cady (before she married Stanton). Confronted with new and difficult ideas about race and identity, Harriet faces the costs and benefits of freedom. Can Leonard, Smith and Cady convince her to go to Canada – and freedom? ELTC is presenting its fourth production and NJ premiere. Mr. Bass received a commission from the Onondaga Historical Association to write POSSESSING HARRIET. It is based on a true story.

﻿﻿﻿Tom Byrn (Gerrit Smith) has performed with ELTC since 2009, including in two solo shows, Will Rogers U.S.A. (2018), and Mr. Lincoln, which was part of ELTC's 2015 and 2016 seasons and toured to Bloomsburg Theatre Ensemble in PA.  Howard Shapiro’s excellent review for “Newsworks” and WHYY TV and Radio stated: “Tom Byrn evokes Lincoln.”  The link for the full review click here. Tom was also in ELTC’s Within the Law, He and She, Biography, The Dictator, and the world premiere of The Ransom of Red Chief.  In 2019, he directed Summerland and in 2018, Silent Sky for ELTC.  In the past few years, Tom also performed in The Importance of Being Earnest and One Slight Hitch by Lewis Black (Cider Mill Playhouse, Endicott, NY), Jane Austen Readings (Franklin Stage Company, Franklin, NY); and Circle Mirror Transformation by Annie Baker (The REP Stage, Baltimore/D.C.). He has acted at various theaters in the Philadelphia area, including, People's Light, Interact, Lantern, Act II Playhouse, and at various other theaters in PA, NY, and OH. Currently an Associate Member, for eleven years, Tom was a full-time Ensemble Member of the Bloomsburg Theatre Ensemble in Bloomsburg, PA, where he acted, directed, wrote, and taught.  He is co-editor of the trade paperback Letters to the Editor (Simon & Schuster) and a member of the Lincoln Center Director's Lab. He is a graduate of Vassar College, and a member of Actors’ Equity Association. Tom resides in the Susquehanna River Valley of central PA.

Emerald Rose Sullivan (Harriet Powell)  Emerald Rose made her virtual East Lynne Theater Company debut as Mille in the zoom reading of “Aftermath.” She is thrilled to be a part of this important and necessary work. Her previous theatre credits include “The Mountaintop” at Hattiloo Theatre, “Riots: B’Hoys Do Macbeth at the Metropolitan Playhouse and “Pipeline,” “The Mountaintop,” “Knock Me A Kiss,”  “The Piano Lesson” and “Ma Rainey’s Black Bottom” at the Westcoast Black Theatre Troupe. Her TV/Film credits include: “FBI: Most Wanted”, “Gotham”, “Baby Ruby” and “Meaty.” Emerald Rose received her BA degree in Acting from Pace University.​

Stephanie Turci (Elizabeth Cady) is thrilled to be performing in her first ELTC show! After graduating from Rutgers University, she moved to NYC and began working at regional theaters, such Bay Street Theater (The Great Gatsby) and the State Theater of NJ (Joseph and the Amazing Technicolor Dreamcoat). She also got to play one of her dream roles, Hazel Grace, in the BMI Workshop of The Fault in Our Stars the Musical. She often sings in 54 Below concerts, working with incredible writers such as Rob Rokicki and Joe Iconis. Stephanie has since jumped into more film work. Her first short film, Death by Clichè, which she wrote, directed, and starred in, was a finalist at the Cutting Room International Short Film Festival.

Photo by Brenna Merritt
Kyle Bass is the author of the play Possessing Harriet, commissioned by the Onondaga Historical Association, which premiered at Syracuse Stage in 2018, was subsequently produced at Franklin Stage Company, and at the East Lynne Theater Company in 2022. Possessing Harriet was published by Standing Stone Books in 2022. salt/city/blues was produced at Syracuse Stage in June 2022. Citizen James, or The Young Man Without a Country, a one-man show on James Baldwin, commissioned by Syracuse Stage, has streamed nationally since 2021. Tender Rain will receive its world premiere at Syracuse Stage in May 2023. Kyle wrote the libretto for Libba Cotten: Here This Day, a new opera based on the life of American folk music legend Libba Cotten, commissioned by The Society for New Music. His new play Toliver & Wakeman was commissioned by Franklin Stage Company through a NYSCA Individual Artist Grant. His other full-length plays include Bleecker Street, Baldwin vs. Buckley: The Faith of Our Fathers, which has been presented at Cornell University, Colgate University, the University of Delaware, and at Syracuse University, and Separated, a documentary theatre piece about the student military veterans at Syracuse University, which was presented at Syracuse Stage and the Paley Center in New York. With National Medal of Arts recipient Ping Chong, Kyle is the co-author of Cry for Peace: Voices from the Congo, which premiered at Syracuse Stage and was subsequently produced at La MaMa Experimental Theatre in New York. Kyle has also written for Noh theatre under commission by Theatre Nohgaku. Kyle is the co-author of the original screenplay for the film Day of Days (Broad Green Pictures, 2017), which stars award-winning veteran actor Tom Skerritt. As dramaturg Kyle worked with acclaimed visual artist and MacArthur Fellow Carrie Mae Weems on her theatre piece Grace Notes: Reflections for Now, which premiered at the 2016 Spoleto Festival USA, and he was script consulted on Thoughts of a Colored Man, which premiered at Syracuse Stage in 2019 and opened on Broadway in 2021. Kyle’s plays and other writings have appeared in the journals Callaloo and Stone Canoe, among others, and in the essay anthology Alchemy of the Word: Writers Talk about Writing. After five seasons as associate artistic director at Syracuse Stage, in September 2021 Kyle was announced the theatre’s first-ever resident playwright. Kyle is assistant professor in the Department of Theater at Colgate University, where he previously served as the Burke Endowed Chair for Regional Studies. Previously, Kyle was faculty in the M.F.A. Creative Writing program at Goddard College from 2006 to 2018, taught playwriting in Syracuse University’s Department of Drama and at Hobart & William Smith Colleges, and the 2019/20 the Susan P. Stroman Visiting Playwright at the University of Delaware. A three-time recipient of the New York Foundation for the Arts (NYFA) Fellowship (for fiction in 1998, for playwriting in 2010; for Screenwriting in 2022), a finalist for the Princess Grace Playwriting Award, and Pushcart Prize nominee, Kyle holds an M.F.A. in playwriting from Goddard College, is a proud member of the Dramatists Guild of America and is represented by The Barbara Hogenson Agency.

Mark Edward Lang (Director) has a diverse background working in the theater, from acting and directing to scenic design and playwriting.  New York directing projects (production and workshop) include the interactive comedy INSTANT SHAKESPEARE, Feydeau’s farce THE TURKEY, political parody THE WHITE HOUSE ’96, and OTHELLO on 42nd Street starring Timothy D. Stickney of ABC's One Life to Live.  Regional includes Sam Shepard’s FOOL FOR LOVE in Florida and an acclaimed production of O’Neill’s ANNA CHRISTIE for ELTC.  As a playwright: LUNT AND FONTANNE at Classic Theatre of San Antonio and FringeNYC, SCOTT & ZELDA: A LIFE AFFAIR (ELTC and NYC).  Corporate leadership theater events across the country and around the world with Leadership-Masters.  Acting roles include many seasons with ELTC, including 2019’s THE RAINMAKER.  Honors graduate of Vassar College (Theater Major, Kazan Prize for Excellence in the Dramatic Arts)

​Amanda Brinlee (Stage Manager) is a small business owner, stage manager, and performer. Since receiving her Bachelors of Arts in Acting in 2020 from Fairleigh Dickinson, she‘s performed in ELTC’s virtual reading of
Something to Vote For; worked backstage and on in Vaudeville Variety, Tales in the Backyard and Poe by Candlelight; Assistant stage-managed Dorothy Parker: A Certain Woman, and assistant directed the 2021 Student Workshop. Recently she staged managed Who Am I This Time? and is the costumed storyteller for “Ghosts of Christmas Past Trolley Rides,” an event in partnership with Cape May MAC. When she is not working in theater, she is running her small business, Amanda Brinlee Designs on Etsy, and raising her daughter. Amanda would like to thank ELTC and Gayle, as well as her husband and the rest of her family for their love and support. Member AEA.