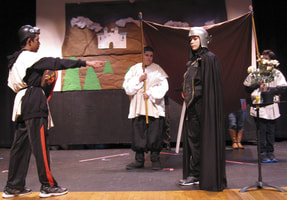 Art programs in schools support the development of skills in students’ creativity, critical thinking, collaboration, and communication. Acquisition of these skills bolster academic and overall success in life.

Believing that art should be accessible to students, ELTC has provided theater workshops to schools in South Jersey, at no cost to these towns or schools, continuously, since 2000, and is the only not-for-profit in South Jersey to do so. The theater seeks funding through organizations like Target and the New Jersey Theatre Alliance, and individual contributions.  Pictured above are some students after a performance of Aesop's Fables at West Cape May Elementary School, and pictured left are students in Wildwood's after-school program in The Knight Who Wouldn't Fight. ​​
﻿
Dear Gayle,
I wanted to write to formally thank you for your participation in our 21st Century Community Learning Centers funded after school program at the Wildwood Middle School this year. The fact that we were able to pursue our theme of visual and performing arts from the start of the program with a professional theater company that also has such skill working with young students, has been a tremendous help to getting our program off on the right foot.
Your dedication, and that of your staff, in working with us, not just as a contractor, but as a true community partner in the achievement of our goals for the program, has been wonderful.  We know we can count on you every week to provide our students with meaningful experiences that they would not otherwise have.  Our two trips so far to see East Lynne productions at your theater have also been opportunities for our students to broaden their life experiences which can only benefit them, especially in providing them background which will help them in their academics.  You have also been a great asset in connecting us with other potential partners in the theater arts.
We look forward to continuing and expanding our relationship with East Lynne throughout the life of this five year grant and beyond.   - Josepha M. Penrose, Supervisor of Curriculum & Instruction, Wildwood Public School District 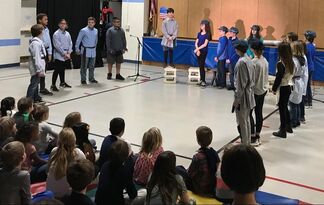 History comes alive!
After six days of working with Gayle Stahlhuth, who also wrote the script, students at West Cape May Elementary School performed Henry Sawyer and the Civil War, about Cape May's own Civil War hero who built the Chalfonte Hotel. An enthusiastic audience attended the free performance in March 2019. Tom Sims, Executive Director of the Cape May Film Festival and members of The Young Filmmakers Program created a documentary the other time students performed it in March 2009.  To see it on YouTube, CLICK HERE.

ELTC has conducted residencies in this school since 2000.  Shows students have performed include scenes they've written about the Civil War, The Wizard of Oz, and Rip Van Winkle. Funding for most of these residencies came from New Jersey Theatre Alliance's Stages Festival in March. Picture right are a few of the students after the performance.

Dear Gayle,
​Thank you greatly for coming to work with my class to put on Henry Sawyer and the Civil War! I learned many things while reading the script. For example, I hadn't even heard of Henry Sawyer before this play! Also I had a fantastic time performing and when I heard we were going to do another play again this year, I shouted with joy! -  Megan, a student

Since it was the 100th Anniversary of the Founding of Wildwood in 2012, students at Glenwood Avenue Elementary School wrote and performed scenes (as staged readings)  about Wildwood's history. To read an article in "The Press of Atlantic City" about this residency, Click Here   To read a 2011 article in "The Press" about another Glenwood residency, ﻿Click Here.  Funding for this residency was from Target. 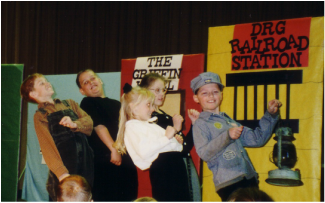 ﻿Residencies are tailored to the needs of the teachers, curriculum, and/or the community

Residencies may be part of the classroom experience or after school, and are usually 1-10 days. The artists-in-residence are creative and, given appropriate time for preparation, are capable of creating a residency with specific goals and needs. They are also accustomed to working with special populations. Picture left are students in Utah performing a play they wrote about Bingham Canyon, under the guidance of Gayle Stahlhuth..

It has been proved that students who take four years of arts and music classes average almost 100 points higher on their SAT scores than students who take only half a year or less of such classes. Additionally, low income students who are highly engaged in the arts are more than twice as likely to graduate college than their peers with no arts education. These are just two examples of many that illustrate how critical arts education is to the next generation of Americans. 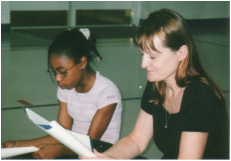 Example of a Residency Meeting the Core Curriculum Content Standards

A 10-day residency developed between the PTA President, fifth grade teachers, and the artist-in-residence titled The Civil War: A Students’ Perspective, entailed the students creating and performing scenes from the Civil War. The Social Studies core curriculum content standards for New Jersey 6.3, 6.4 and 6.6 in which students are to acquire an historical understanding of political, economic and diplomatic ideas and social values that helped shape the United States, were met. This residency also directly supported the core curriculum content standards for the Language Arts Literacy 3.2, 3.3 and 3.4, and the Visual and Performing Arts 1.1, 1.2, 1.3, 1.4 and 1.6.  Pictured is Gayle Stahlhuth with a student, reading scripts.

Dear Gayle,
On behalf of the students, staff, and parents of the West Cape May School District, I would like to commend and thank you for the excellent work you do with our young people during the March Artist-in-Residence program funded by the East Lynne Theater Company and the New Jersey Theatre Alliance.  It is always gratifying to watch the growing excitement of the children as they become involved with preparing and performing a play.  Having working with you in the past, I can speak from personal experience that your enthusiasm and devotion to theater arts motivates the students to present their very best.
The Arts are an extremely important part of the education of all children, and, in these days of rapidly shrinking budgets, I am proud and thankful that we are able to continue to enhance the academics of our district with quality programming and activities such as yours.  We are indeed fortunate to be able to have you work with our students.
Thank you and wishing you well in all that you do. - Brenda Williams Elliott, Supervisor, West Cape May Elementary School