Location: Cape May Presbyterian Church, 500 Hughes Street, Cape May, NJ
​
Tickets: $28; $20 student & military (retired/vet/active); ages 12 and under free
Click here for tickets
5 Star Review on TripAdvisor by TravelingAmos
​While a play consisting of actors speaking into microphones as if performing for radio may sound boring, this was far from it. We were here during Sherlock Holmes Weekend in November, and we added this to the overall experience.  The quality of the acting here was first-rate!  We were captivated throughout the roughly one-hour long performance.  The sound engineer was perhaps the most interesting part as he simulated sounds for fire, wind, water, and other various sounds right in front of us as the actors spoke into the microphone. If you come to Cape May for Sherlock Holmes Weekend in the spring or fall, a visit here is a must! 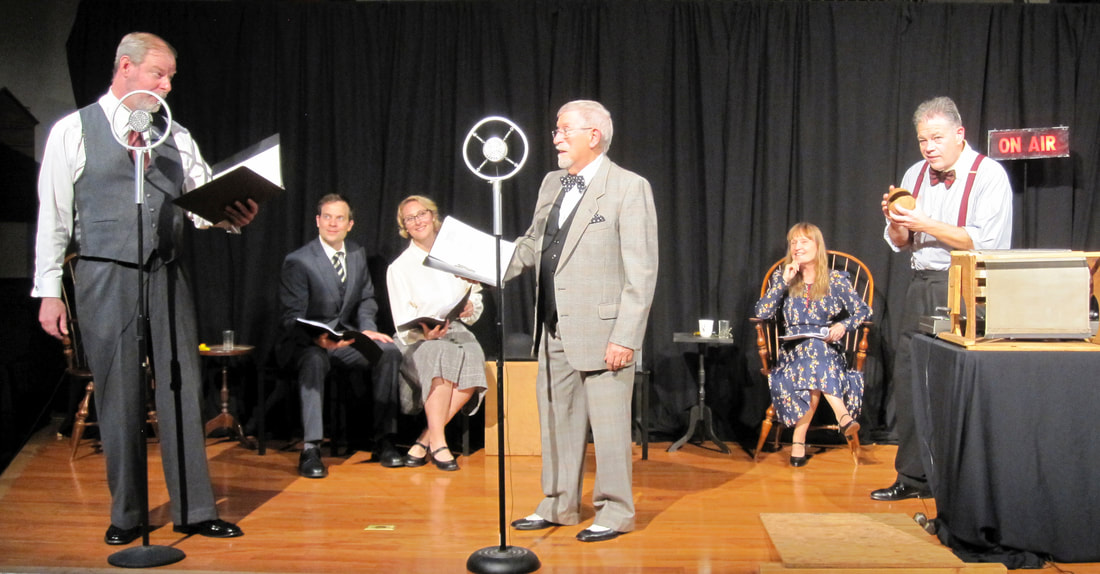 Tom Byrn, Mat Labotka, Veronique Hurley, Fred Velde, Gayle Stahlhuth, and Rob LeMaire in ADVENTURE OF THE BLUE CARBUNCLE. Photo credit: Jacob Pierri
"The question is the sequence of events leading from the rare gem, the Blue Carbuncle, at one end, to the stomach of a goose at the other,” says Sherlock Holmes to Dr. Watson as they begin an investigation that might save an innocent man from prison.

ELTC invites you to be part of our "radio audience" when we perform this famous mystery with live sound effects and commercials, and actors portray several roles to make the tale come to life. Before television and the Internet, people sat eagerly by the radio to hear the latest dramas, comedies, and news. Many radio shows were performed in front of live audiences at the same time they were sent across the "airways."

This radio-style production is based on the story by Sir Arthur Conan Doyle, adapted by Craig Wichman, Founder and Producer of Quicksilver Radio Theater.

The first time a Sherlock Holmes adventure was heard on the airways was October 20, 1930.  The Holmes’ tale was The Speckled Band, adapted by Edith Meiser.  Meiser proposed the idea for a Holmes’ radio show to NBC. At first they passed on the idea for lack of a sponsor, so Meiser found one: G. Washington Coffee. Doyle died during the summer of 1930, but his estate entrusted the development of the series to Meiser and NBC.  Meiser, also an actress, wrote the series single-handedly for a dozen years, and with help through most of the 1940's.  No audiences were allowed during the early broadcasts. ​​Famous actor/playwright William Gillette, at age 77, starred in the radio show’s premiere.  It was he who had created the first stage adaptation of the writings of Doyle in 1899, under the title Sherlock Holmes.  Although he’d played the role over 1,000 times, he was uncomfortable with the radio format. Clive Brook replaced him for the next two performances.  Richard Gordon played the role from November 10, 1930 through May of 1933, and again in 1936.  Leigh Lovell and Harry West played Dr. Watson. From 1939 to 1946, Holmes and Watson were played by Basil Rathbone and  Nigel Bruce.  At the same time, they played these roles in 16 films. The Sherlock Holmes radio series continued through 1950.
THE CAST and CREW

﻿﻿﻿Tom Byrn (Sherlock Holmes) has performed with ELTC since 2009, including in two solo shows, Will Rogers U.S.A. (2018), and Mr. Lincoln, which was part of ELTC's 2015 and 2016 seasons and toured to Bloomsburg Theatre Ensemble in PA. Tom was also in ELTC’s Within the Law, He and She, Biography, The Dictator, and the world premiere of The Ransom of Red Chief. In 2018 and 2019, he directed Silent Sky and Summerland for ELTC. Tom has acted at various theaters in the Philadelphia area, including, People's Light & Theatre and the Delaware Theater Company, and at various other theaters in PA, NY, and OH. Currently an Associate Member, for eleven years, Tom was a full-time Ensemble Member of the Bloomsburg Theatre Ensemble in Bloomsburg, PA.  He is co-editor of the trade paperback Letters to the Editor (Simon & Schuster) and is a member of Actors' Equity and the Lincoln Center Director's Lab. He resides in the Susquehanna River Valley of central PA with his wife and daughter. To Lee....

​​Robert LeMaire (Man with the Goose, Windigate, Maudslay, Sound Effects, etc.) recently played "Teddy" in ELTC's Arsenic and Old Lace and was the Assistant Director.  Currently, he's the director for ELTC's Summer Student Workshop and was honored, along with others who work with youth in theater, at the New Jersey Theatre Alliance’s annual gala in 2018. He’s performed in several ELTC productions including Ah! Wilderness, Dracula, The Late Christopher Bean, To the Ladies, You and I, The Dictator (2001 & 2010), and The Ransom of Red Chief. He’s worked sound effects and performed in ELTC’s Sherlock Holmes and Nick Carter Detective radio-style shows since 2008. His directing work for the Ocean City High School Drama Guild include Addams Family: A New Musical, Stage Door, Spamalot, Footloose: The Musical, Stage Door, and currently, he’s directing It's a Wonderful Life. Other performance work includes Vistas of Democracy, a video series in NJ Network Public Television's Educational NJ Legacy Series. You may catch his shoulder in the History Channel's Civil War Terror.

Fred Velde (Dr. Watson, Alfie) is a native New Yorker and has been part of  the New York theater scene for over forty years. He has been a member of The Harbor Theatre since 1995 and is currently a member of The Workshop Theater. His theatre credits include The Price of Genius on Broadway, Sex by Mae West Off-Broadway, and Traveling Souls in Moscow as a member of The Phoenix Ensemble. For ELTC, he played Dr. McPhail in Rain, Chris in Anna Christie, Mr. Forbes in Dulcy, Detective Dupin in The Poe Mysteries, and Dr Watson in The Copper Beeches, The Speckled Band, and The Norwood Builder. As well as theater, he has appeared in film, soaps, Comedy Central and commercials. He is a member of AEA and SAG-AFTRA.

﻿Gayle Stahlhuth (Director, Mrs. Hudson, Street Musician, Mrs. Breckenridge) has performed off-Broadway (Manhattan Theatre Club, etc.), in national tours (Cabaret, Fiddler, etc.), regional theater (Gateway Playhouse in Long Island, etc.), television, and radio. Other work involves directing cabaret shows in NYC, starting a dinner theater in Billings, MT, and creating a Medieval Festival at The Walters Art Gallery in Baltimore. A Year in the Trenches (2017), marked her 100th production for ELTC since becoming the company’s artistic director in 1999. She’s been awarded commissions from The National Portrait Gallery, the Missouri and Illinois Humanities Councils, and grants from the NJ Humanities Council, the NYS Council on the Arts, and the Mid-Atlantic Foundation for the Arts. For several years, she was a judge for the Emmy Awards in the field of broadcast news. In 2016, she was honored for her work in theater by The National Association of Professional Women (NAPW). Member: AEA, SAG-AFTRA, Dramatists Guild, and NAPW.

Morgan J. Nichols (stage manager) has been seen in the following ELTC productions: Arsenic and Old Lace, To The Ladies, The Butter and Egg Man and Berkeley Square. Of late in his career he has been focused on building a TV and film career, landing roles in shows like CBS's Blue Bloods and HBO's Vinyl. Most importantly, he would like to say a big thank you to you the audience, for without you, there would be no reason to get up in the morning. Thank you. Member AEA.

​Amanda Brinlee (production assistant) is a recent graduate of Fairleigh Dickinson University and is thrilled to start her professional career with East Lynne Theater Company. She was recently seen in ELTC’s virtual production of Charlotte Perkins Gilman's Something to Vote For as Mrs. Reedway and as Millie in Vaudeville Variety. Her favorite projects include working on Steel Magnolias as Truvy, Hay Fever as Jackie and Lia Romeo’s new play, The Agency as Ani. She would like to thank her family and friends for their support and ELTC for this opportunity.