​MICHELE LaRUE on the Road in March ​
SOMEONE MUST WASH THE DISHES: AN ANTI-SUFFRAGE SATIRE written by pro-suffragette Marie Jenney Howe      FREE! 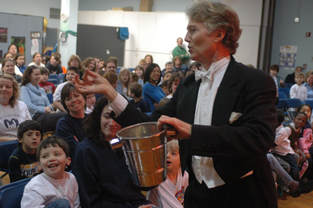 Robert Aberdeen performing his Magic!
VICTORIAN MAGIC and SHERLOCK HOLMES ADVENTURE OF THE SPECKLED BAND on the Road in NJ in March, Thanks to NJTA's Stages Festival    ALL FREE!

Sat. March 16 at 11:00 am: SHERLOCK HOLMES ADVENTURE OF THE SPECKLED BAND at the Barnegat Branch of the Ocean County Library, 112 Burr St, Barnegat, NJ 08005

Fri. March 29 at 7:00 pm: VICTORIAN MAGIC WITH ROBERT ABERDEEN at Oakland Public Library, 2 Municipal Plaza, Oakland, NJ (Bergen County)
​
FOR DETAILS ABOUT THE SHOWS, GO TO OUR TOURING PRODUCTION PAGE UNDER OTHER PROGRAMS: Click here to get there

The Stages Festival is a project of the New Jersey State Council on the Arts and the Alliance. Major funding is also provided by Bank of America, The Horizon Foundation for New Jersey, and PSEG Foundation. Additional support is provided by individuals, corporations, and foundations such as The Blanche and Irving Laurie Foundation, F.M. Kirby Foundation, The Geraldine R. Dodge Foundation, Fund for the New Jersey Blind, and George A. Ohl, Jr. Trust.