Something to Vote For (1911) takes place in the home of Mrs. May Carroll, the new president of the Women’s Club,
a group dedicated to discussing important concerns within their community.  Being anti-suffrage, they believe that they can tell men what they think should be done, and the men will, for the most part, do their bidding.  When the group is concerned about the purity of the milk given to babies, Dr. Strong, a woman doctor from Colorado, is invited
to speak to the Club.  She puts the need for women to vote at the center of the conversation.

In the early 20th Century, plays were an important part of the suffrage movement. They were usually printed
in magazines and read aloud and/or staged in private homes. The hope was that the controversial conversation of
women’s suffrage could be presented in a comfortable setting – bolstering the cause and hopefully swaying some
​anti-suffragists.  Many of the British suffrage plays survived - most of the American suffrage plays did not. ​Something
to Vote For is now included in American Women's Suffrage: Voices from the Long Struggle for the Vote 1776-1965
​edited by Susan Ware, No. 332 in the Library of America Series.

"I just wanted to say thank you for the wonderful virtual “Something to Vote For."   We thought it was amazing. I thought it worked really well in the virtual format, but I also know how hard it is to put those virtual plays together.  Gayle, I think you did an amazing
job of making it look seamless. We have watched many virtual concerts and plays over the past year and they do not always go without a hitch, although yours certainly looked like it did. So we want to let you know that we appreciate all the work that goes
on behind the scenes to make a virtually (HaHa) flawless performance. We also thought each of the actors did an excellent job
and ​ their various characters really came  through despite not having sets or stage movement.  The facial expressions and vocal inflections from the actors made each character come alive, and the costumes, including the hats were perfectly chosen. Roger
​and I spent a very enjoyable evening, enjoying a first rate professional performance. Please give our thanks to al who participated."
​- Roger and Heather 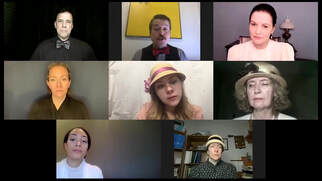 *Pat Dwyer (Henry Billings) played Peter Shaw in ELTC's Silent Sky.  In New York, he created the roles of Spurius/Remus in Kevin Brewer's adaptation of Shakespeare's Rape Of Lucrece for the NY Shakespeare Exchange and General Haywood Hansell in Douglas Lackey’s Daylight Precision. He's played Hugh for Mother of Invention’s Look Homeward Angel (Dir. Austin Pendleton,) Antonio in Identity Theatre's Tempest and the Ghost/Gravedigger in The Shakespeare Forum’s inaugural production of Hamlet. Other regional theatre roles: Christopher Wren in The Mousetrap at Casa Manana, Drew in Eastern Standard for Theatre 3, Fred in Addison Center Theatre's Christmas Carol and Feste in Twelfth Night for Stage West. On film: The Ghost, Claudius & Player King in the feature Hamlet In The Golden Vale and he made the Marriage Equality documentary, Married and Counting.  Member AEA.

﻿Susan Tischler  (Mrs. Wolverhampton) is the storyteller for The Ghosts of Christmas Past Trolley Rides, produced by ELTC with Cape May MAC. She was commissioned by ELTC to write and perform Helpful Hints based on Putnam's Household Handbook (1916) that premiered at The Chalfonte and was part of ELTC's Mainstage Season in 2011. She was also in ELTC's Sherlock Holmes Adventure of the Speckled Band and The People of Cape May vs. Johan Van Buren.  For SPQR Theatre, also in Cape May, she was in Calliope Rose, The Wreck of the Spanish Armada, and her own original works, one of which, Tao of Tisch, she was asked to perform at The Women's Theatre Comedy Showcase in Parsippany, NJ. Other credits include co-producing Barry’s Christmas Opry, in which she plays Minnie Pearl, the proceeds of which go to the West Cape May Christmas Parade.

﻿Gayle Stahlhuth (Director) has performed off-Broadway (Manhattan Theatre Club, etc.) in national tours (Cabaret, Fiddler, etc.), regional theater (Gateway Playhouse in Long Island, etc.),  television (various soaps, etc.), radio (jingles and Voice of  America), and on the Chautauqua Circuit. Since becoming  ELTC’s Artistic Director in 1999, she has produced over 100 differerent plays/musicals (some returned for another season), including 21 world premieres and 10 NJ premieres, and directed over half of them. Her adaptations for ELTC include Tales by Twain, that also ran at Surflight Theatre; Spoon River, based on the famous Anthology by Edgar Lee Masters, and The Ransom of Red Chief based on O.Henry's classic tale. She’s been awarded commissions from The National Portrait Gallery, the Missouri and Illinois Humanities Councils, and grants from the NJ Humanities Council, the NYS Council on the Arts, and the Mid-Atlantic Foundation for the Arts. For several years she was a judge for the Emmy Awards in the field of broadcasting. She is a member of the Dramatists Guild, SAG-AFTRA, AEA, and the League of Professional Women, who honored her in 2016 for her work in theater. ﻿
​​​Charlotte Perkins Gilman (1860 – 1935) known mainly for her novel The Yellow Wallpaper, was not only a writer, but also a lecturer for social reform. She published Something to Vote For in her own monthly magazine, “The Forerunner,” in 1911.  This play is one of the 90 pieces by over 70 writers, included in American Women’s Suffrage: Voices from the Long Struggle for the Vote 1776–1965 edited by Susan Ware, No. 332 in the Library of America Series.  “Amid the flood of books marking the centennial of women’s suffrage, this anthology stands out for its scope and authority. . . . Essential for libraries and a go-to book for anyone seriously interested in women’s suffrage in America.”—Kirkus Reviews (starred review)
​

​New Jersey Theatre Alliance's STAGES FESTIVAL
The "Stages Festival" was developed to encourage New Jersey residents to attend their local professional theaters by making the experience affordable, accessible, and fun. It has reached over 220,000 audience members since its inception in 1997.  To learn more, visit https://njtheatrealliance.org/stages-festival.

Founded in 1981, the New Jersey Theatre Alliance is the first statewide organization for professional, not-for-profit theater companies in the United States, of which ELTC is a proud member. NJTA is a leader in developing model programs that foster collaboration, cooperation and audience development. To learn more about NJTA, visit https://njtheatrealliance.org.

This event is part of the New Jersey Theatre Alliance 2021 Stages Festival, made possible by support from the New Jersey State Council on the Arts, a partner agency of the National Endowment for the Arts; Bank of America; The Horizon Foundation for New Jersey; OceanFirst Foundation; the George A. Ohl, Jr. Trust; New Jersey Historical Commission; and Fund for the New Jersey Blind.