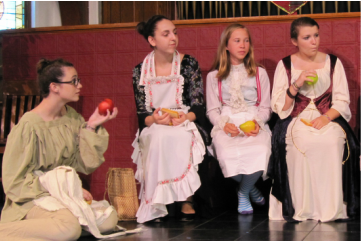 Scene from A CONNECTICUT YANKEE IN QUEEN GUENEVERE'S COURT based on Mark Twain
INFORMATION: This year's show is TBD. Shows from the past include Story Theater, Robin Hood, Dracula's Guest, Tom Sawyer Detective, The Dancing Princesses, An Evening of Fables, 1,001 Arabian Nights, The Little Princess, Alice in Wonderland, Little Women, and Connecticut Yankee in King Arthur’s Court. The show is complete with set, props, and costumes.

Workshop leader: Robert LeMaire is heading up the workshop. During the 1990’s he coordinated Education Programs, including running the Junior Apprenticeship Program, at Historic Cold Spring Village in Cape May County.  He has performed with ELTC since 2001, and his love of acting led him to directing. For the Ocean City High School Drama Guild, he was the assistant director for Robin Hood, Legally Blonde: The Musical, A Christmas Carol, The Man Who Came to Dinner, and Bye-Bye Birdie.  He directed Pride and Prejudice, The Addams Family: The Musical, Stage Door, Footloose: The Musical, Arsenic and Old Lace, and Spamalot.  Recently, he was the assistant director for ELTC's Arsenic and Old Lace, and also portrayed Teddy in the same production. In October 2018, he, along with other Theater Education Directors, were honored by the New Jersey Theatre Alliance. Technical Director, Lee O’Connor, and Gayle Stahlhuth will also be on hand.  In the past, actors currently performing in ELTC’s mainstage productions have helped out, and we’re looking to incorporate at least one of these artists again in 2020.

Location for Workshop and Performance: The First Presbyterian Church, 500 Hughes St. (corner of Decatur and Hughes) in Cape May, where the company is in residence.

Fee: $200.00 to be paid all at once, or in installments; minimum of $50.00 per installment.  Full amount must be received by June 15.  If the student must cancel, fee will be fully refunded if cancellation is before June 15. After this date, $50.00 will be retained by ELTC.