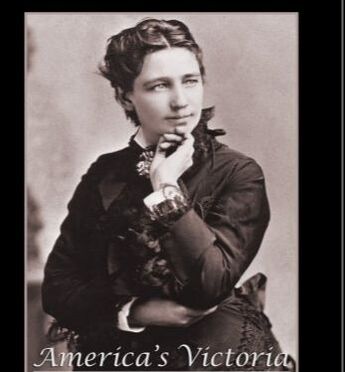 Selected to celebrate the 100th Anniversary of the 19th Amendment, this one-woman play explores the life of Victoria Woodhull, the woman who ran for President of the United States in 1872, through a contemporary lens.  Woodhull appears today wondering if she has left any legacy.  Flashbacks of her life, coupled with her commentary, explore how we can make a better world.  What would she think about the state of women’s rights and social issues today? ​Tune into ELTC’s YouTube Channel to find out!  https://www.tinyurl.com/ELTCYouTube

​Emma Palzere-Rae (Actress and Playwright) has appeared in regional, stock and off-Broadway theater, as well as in film, television and radio. She founded Be Well Productions in 1989, touring several critically acclaimed one-woman plays on characters as diverse as Harriet Beecher Stowe, Emily Dickinson and Gilda Radner. In 1990, she banded together with other female solo artists to create New York City’s Womenkind Festival. Recent roles include Mrs. Miller in “Ah, Wilderness!”(East Lynne Theater Company); Mother Miriam in “Agnes of God” (Madison Lyric Stage); and Sister Aloysius in “Doubt” (Emerson Theater Collaborative). Currently, she is the Associate Director at Artreach, Inc. (Norwich, CT) which provides arts programs to adults living with mental illnesses. A graduate of Emerson College, Emma is an active member of Actor’s Equity, and the Dramatists Guild, where she serves as the regional representative for New England - West.

Albert Cremin (Director) is an actor’s director. His intention to deliver a solid physical presentation, true to the playwright, is matched by his desire to help actors deliver honest and telling performances with an emphasis on compatible technique. In the case of “The Woodhull Project”, the performer is the writer and the work has been to take the actor from the objective to the subjective in the understanding and portrayal of character and situation. His Masters degree in Theatre Education has allowed Mr Cremin to work on a variety of levels, from high school (directing Matt Damon and Ben Affleck) to his more recent production of Terrence McNally’s "Master Class” with Kathryn Kates for The Bermuda Festival of The Performing Arts.

Carin Jennie Estey (Production Stage Manager) previously joined Be Well Productions for the 2019 performance of “The Woodhull Project” at the Hartford Fringe Festival. Carin is a theatre artist based out of Southeastern, CT. Carin graduated Magna Cum Laude from Ithaca College with a Bachelor of Arts in Theatre Studies with focuses in both directing and playwriting. Additional stage management credits include the world premiere of Judy Tate's “Fastblood” in collaboration with Civic Ensemble and The American Slavery Project, Minita Gandhi's “Muthaland” at The Clark Theatre Recent directing credits include the virtual workshop of Julia Dreitzer's “End of the Movie”, Audrey Lang's “a/in/the/of” as part of The Act One: One Act play Festival at The Secret Theatre in NYC, and “alex getting better”, also by Audrey Lang. Carin's plays have been performed at various festivals including Ithaca College's New Play Incubator in 2019 and The Eugene O'Neill Theater Center’s Young Playwrights Festival in 2013. Carin works as the Event Coordinator at Artreach, Inc. Many thanks to Emma for giving her the opportunity to work on “The Woodhull Project” again!

Nearly a century after her death, Victoria Woodhull continues to fascinate. While her life was marked by notoriety and scandal, her ideas and speeches remain progressive. She was an ardent warrior for the rights and freedoms of women and the working class.

Born in Homer, Ohio in 1838, Victoria did not come into a world with any privilege. Her family struggled with poverty and her ne’er-do-well father used his attractive and talented daughters to make money with traveling medicine shows. They were often ‘run out of town.’ While not a lot is known about Victoria’s childhood, we can assume it was troubled. She only had three years of actual schooling.

At the age of 15, she married her first husband, a doctor — and a drunk. Together, she and Canning Woodhull had two children: Byron and Zulu Maude. Byron is said to have been intellectually disabled, a condition Victoria believed to be the result of her husband’s alcoholism. This experience was the beginning of her forming ideas on social freedom.

Victoria’s closest confidante was her sister Tennessee, or ‘Tennie’. Together, they moved to New York City in 1870. Some might say they took the city by storm. In fact, during the six years they were in New York, they made these firsts:


In addition, Victoria can add these to her list of ‘firsts’:


But perhaps her most notable achievement was being the first woman to run for President of the United States. In fact, she ran three times: 1872, 1884 and 1892. It’s important to note that much of her early accomplishments came from her work in the suffrage movement. Yet, when she ran for President, she herself could not legally vote. Her campaign was based on her activism for women and the oppressed and focused on a platform of ‘Free Love’ – the idea that people should be able to love who they love, for as long as they love. While this may sound scandalously about sexuality, this is not the focus of her message. Her ideas were based on fighting for the rights of women: if women were trapped in a marriage in order to have a roof over her head what freedoms did they have? Of course, women could not own property and could rarely support themselves with honest work. Furthermore, what if that husband who was to be the provider, turned out to be an alcoholic, addicted to gambling or abusive? A woman had no recourse but to accept her fate. But Victoria felt a woman was a human being and could not be owned by her husband. A woman ‘must own herself.’ As human beings, women are entitled to all the rights of men. Victoria had a vision for something better.

Victoria was also known to have spiritual visions. She believed she had a spirit guide named Demosthenes, who predicted Victoria would be a leader. Victoria, in fact, owed part of her popularity to the rise of the Spiritualist movement and its connection to the suffrage movement. Her dynamic speaking skills included occasionally going into a trance.

Yet Victoria was taken very seriously and her impassioned and important messages took hold. Today, there is still truth in them.

And yet, you may be asking yourself, ‘why have I never heard of Victoria Woodhull?’ Like many who are ahead of their time – and Victoria truly was a head of her time – they are forgotten. In Victoria’s case, she may have played a role in this as well. It would seem that she wrote herself out of history, perhaps out of a desire to live a quieter life in her later years.

In 1876, Victoria and Tennie moved to England to start a new life. She still lectured on progressive issues. At one of these lectures, she met John Biddulph Martin. They married in 1883. She remained in England until her passing in 1927, at the age of 88.

Did Victoria erase her history out of a desire to leave scandal and notoriety behind? Or did she give up trying to make positive change on important social issues? Perhaps she realized she was ahead of her time and times needed to catch up to her. We’ll never know why Victoria did not document her own life. Thankfully, she made a lasting impression on the world nonetheless.