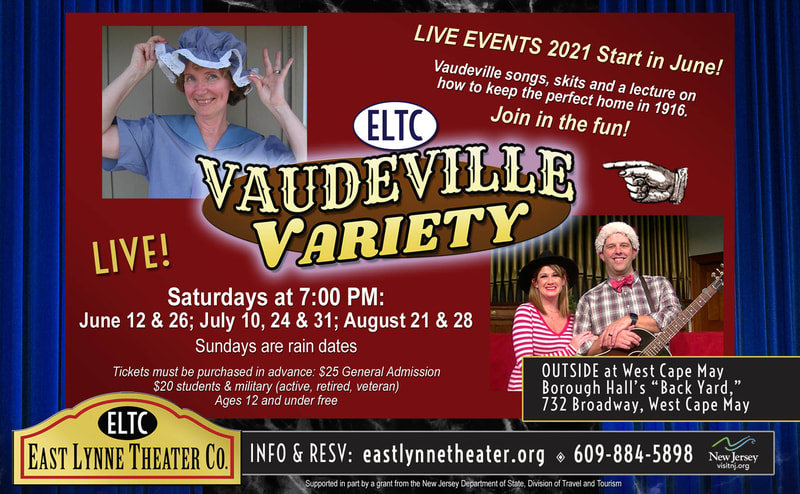 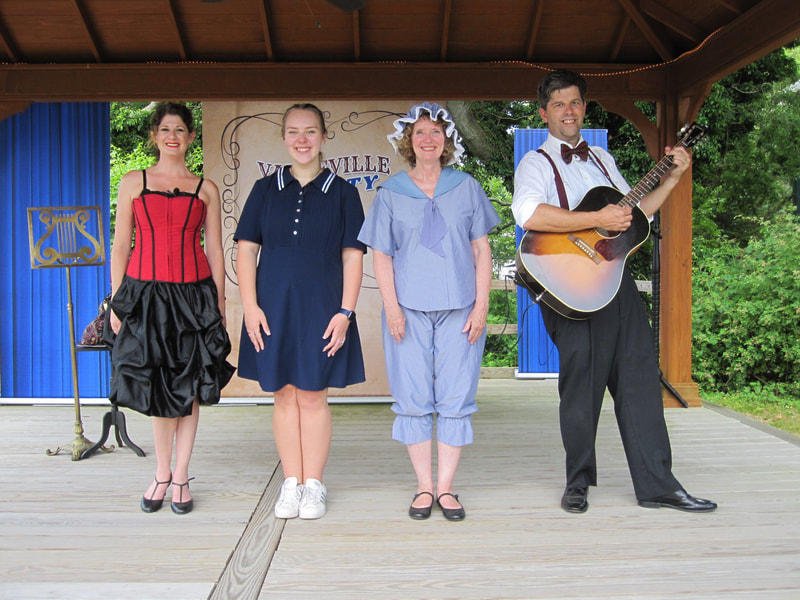 Conceived and Directed by Gayle Stahlhuth
Assisted by James Rana

Performed outside at West Cape May Borough Hall’s “Back Yard,” 732 Broadway in West Cape May.
This is the same location where the Farmer's Market is every Tuesday during the summer.
​It is not far from Cape May's Historic District, with plenty of parking.

ELTC adheres to all regulations set forth by the State of New Jersey to implement safety measures to ensure a
safe and enjoyable theater going experience for our patrons, staff, volunteers, and artists.​
CLICK HERE TO PURCHASE TICKETS
"Like the vaudeville shows of the past, Vaudeville Variety makes the audience de-stress and laugh out loud."
- Carol Emmens from her article in "The Cape May Star & Wave"
​​
The entertainment known as "Vaudeville" originated in France under the name "Vaudevire" or "Satirical Song," and was a combination of comic skits and unrelated songs.  This lighthearted entertainment quickly spread to other countries and was popular in the United States from the mid-1890s through the early 1930s.  In one evening of Vaudeville, there could be up to a dozen unrelated acts that might include comedians, singers, magicians, acrobats, jugglers, dancers, and trained animals.  Actors such as Jack Benny and George Burns and Gracie Allen started out in Vaudeville before starring in films and on their own television shows. Early television such as "The Ed Sullivan Show," relied on the Vaudeville-style format.
​    Mae Savell Croy, portrayed by Susan Tischler, is travelling throughout the country promoting her new book, Putnam’s Household Handbook.  Croy did write this book that contains suggestions such as “the best therapy for the baby is to leave it alone, to put it outdoors, and to seemingly forget all about it.”  ELTC commissioned Susan to write the hour-plus Helpful Hints, based on Croy's book, that premiered in Cape May in 2008, directed by Karen Case Cook, before the show went on the road.  It was performed on ELTC's mainstage in 2011.  Susan has created a thirty-minute version of Helpful Hints just for Vaudeville Variety.
Joining Mrs. Croy are two vaudevillians, portrayed by Holly and Will Knapp.  In one skit, Madame Vivesectova, the world's greatest knife thrower, asks a volunteer to hold a cigarette in his mouth, claiming that she will cut the cigarette in half with her knife.  Can she do it?  And why is her full-time assistant, Sylvester, no longer with her?  And then there’s the winning horse called “I Don’t Know,” in a “Day at the Races” that sets the laughter in motion, and "Deductions," "The Doctor's Sketch," and quick comic exchanges during the song "Under the Yum Yum Tree."  Other songs are "Moonlight Bay," "By the Light of the Silvery Moon," "When You Wore a Tulip," and "Some of these Days."
Amanda Brinlee plays Millie, who assists the other three, meanwhile, longing to take center stage herself.
​     All four performers have worked for ELTC before.
Below is a picture of Holly and Will Knapp in VAUDEVILLE VARIETY and a photo from last October, when ELTC used the same outdoor space for POE BY CANDLELIGHT while the audience was taking their seats. 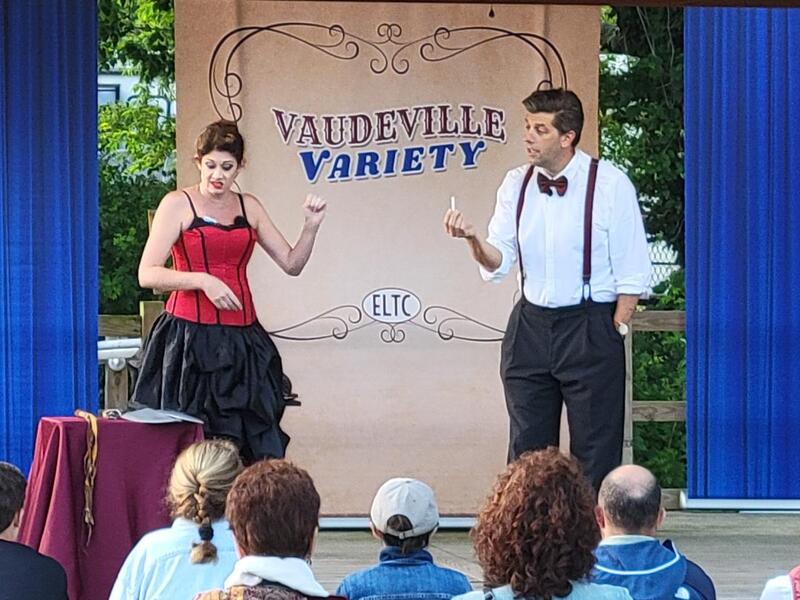 Holly and Will Knapp were in ELTC's Yuletide Tales in 2020.  They have been regular performers in the Cape May and South Jersey area since moving to the area in 2004 and 2003 respectively.  After graduating from University of the Arts in 2004, Holly began working as an actress at Elaine's Dinner Theater (bringing Will on board in 2007) and serving as the Artistic Director and Executive Producer starting in 2009, developing nearly a dozen original shows over the course of her tenure.  She made her ELTC debut in the 2015 staged reading of Our American Cousin, and was also featured in Cape May Stage's Moonlight and Magnolias in 2007.  Recent credits include Audrey (Little Shop of Horrors), Mrs. Walker (Tommy), Doralee (9 to 5), Regina (Rock of Ages, twice!), Morticia (Addams Family), Fastrada (Pippin), Evelyn Nesbit (Ragtime) and Mrs. Lovett (Sweeny Todd).  Currently, Holly is the co-host of the 5-start rated true crime/comedy podcast We Would Be Dead..  Will began playing music professionally with the Off Duty Super Heroes in Philadelphia in the late 90's, and began a solo (and occasional duo) career after moving to South Jersey.  Pre-COVID, you could find him playing music out and about around Cape May, Wildwood and Avalon several times a month.  Holly and Will live in Del Haven with their two children, Violet and Flynn, three cats and a dog,

﻿Susan Tischler is the storyteller for The Ghosts of Christmas Past Trolley Rides, produced by ELTC with Cape May MAC. She was commissioned by ELTC to write and perform Helpful Hints based on Putnam's Household Handbook (1916). Directed by Karen Case Cook, it premiered at The Chalfonte and was part of ELTC's Mainstage Season in 2011. She was also in ELTC's Sherlock Holmes Adventure of the Speckled Band and The People of Cape May vs. Johan Van Buren, written by Dutch TV personality Judge Frank Visser, produced by ELTC as part of the 400th Anniversary of Cape May’s Founding. From 2017-2019, she performed for SPQR Theatre, also in Cape May, in Calliope Rose, The Wreck of the Spanish Armada, and her own original works, Meet the Locals and Tao of Tisch. She was then selected to perform Tao of Tisch at The Women's Theatre Comedy Showcase in Parsippany, NJ. Other credits include portraying Minnie Pearl and co-producing Barry’s Cape May Opry and Barry’s Christmas Opry, proceeds of the latter go to the West Cape May Christmas Parade. Susan is the co-owner of Kaleidoscope and Just for Laughs on the Washington Street Mall in Cape May, and writes for Exit Zero. Her reminiscence of her father, Fred Brown, a coal miner from Pittsburgh, was included in the late Tim Russert’s book Wisdom of Our Fathers, published in 2006.

​Amanda Brinlee (Millie/Production Assistant) is a recent graduate of Fairleigh Dickinson University and is thrilled to start her professional career with East Lynne Theater Company. She was recently seen in ELTC’s virtual production of Charlotte Perkins Gilman's Something to Vote For as Mrs. Reedway and her favorite projects include working on Steel Magnolias as Truvy, Hay Fever as Jackie and Lia Romeo’s new play, The Agency as Ani. She would like to thank her family and friends for their support and ELTC for this opportunity.

﻿Gayle Stahlhuth (Director) has performed off-Broadway (Manhattan Theatre Club, etc.) in national tours (Cabaret, Fiddler, etc.), regional theater (Gateway Playhouse in Long Island, etc.),  television (various soaps, etc.), radio (jingles and Voice of  America), and on the Chautauqua Circuit. Since becoming  ELTC’s Artistic Director in 1999, she has produced over 100 differerent plays/musicals (some returned for another season), including 21 world premieres and 10 NJ premieres, and directed over half of them. Her adaptations for ELTC include Tales by Twain, that also ran at Surflight Theatre; Spoon River, based on the famous Anthology by Edgar Lee Masters, and The Ransom of Red Chief based on O.Henry's classic tale. She’s been awarded commissions from The National Portrait Gallery, the Missouri and Illinois Humanities Councils, and grants from the NJ Humanities Council, the NYS Council on the Arts, and the Mid-Atlantic Foundation for the Arts. For several years she was a judge for the Emmy Awards in the field of broadcasting. She is a member of the Dramatists Guild, SAG-AFTRA, AEA, and the League of Professional Women, who honored her in 2016 for her work in theater. ﻿

﻿James Rana (Assistant to the Artistic Director) East Lynne credits include: Nothing Matters, A Year in the Trenches (playwright), Dracula, Strictly Dishonorable, Huckleberry Finn (playwright), Zorro! (playwright/performer), The Legend of Sleepy Hollow (playwright), The Poe Mysteries (playwright/performer), and Sherlock Holmes’ Adventure of the Norwood Builder.  Ensemble Studio Theatre, Pan Asian Rep, Luna Stage, The Shakespeare Theatre, Royal Shakespeare Co. (UK), Classical Theatre of Harlem, Actors Shakespeare Co., Contemporary American Theatre Festival, Coney Island USA, Comedysportz, Worth Street Theatre, Shakespeare & Co., Princeton Rep, Globe Neuss and Bonn Biennale (Germany). Film/Television: Swim Little Fish Swim, The War Within, A Girl Like You With A Boy Like Me, The Assassin, Law & Order: SVU, Chicago Fire, Third Watch, One Life To Live, As the World Turns, Conan O’Brien. Radio: Poe: A Celebration (wrote and narrated) for NPR. Stage Adaptations: From The Earth To The Moon (workshop: Tri-State Actors Theatre), A Christmas Carol (Actors Shakespeare Co.).  In 2017, he performed in Off-Broadway's The Government Inspector starring Michael Urie. In the fall of 2017, he began rehearsals for Broadway’s The Band's Visit, and performed several times in the role of the Band's Leader, originally performed by Tony Shalhoub, and other roles.  When this Tony Award winning show closed on Broadway in April 2019, he began performing in The National Tour.  James received his MFA from Trinity Rep and is a member of Actors’ Equity Association, SAG-AFTRA, and the Dramatists Guild..