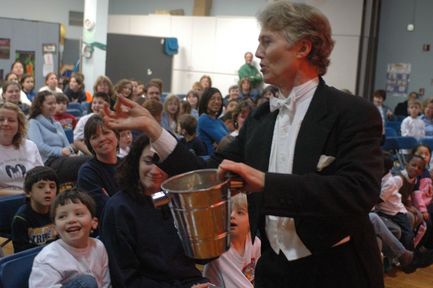 ​SHOWS ON THE ROAD in MARCH

ALL SHOWS ARE FREE DUE TO NJ THEATER ALLIANCE'S STAGES FESTIVAL (See below)
About the Show . . . . . .
Actor/magician Robert Aberdeen delights audiences of all ages with his sleight-of-hand. Performances include selections from The Oldest Illusion in the History of Magic: "The Cups and Balls" and The Second Oldest Illusion: "The Mystery of the Silver Rings." Robert has performed his show throughout the country.

Robert Aberdeen is a veteran of five Broadway shows: The Passion of Joseph D, the original Fiddler on the Roof, Billy Budd, Royal Hunt of the Sun, and Citizen Tom Paine. He's also performed in Off-Broadway shows and in regional theater including ELTC where he was in Spoon River, Women and the Vote, and The Dictator.  He starred in the international tour of The Magic Show and in his own television special Magic Maestro Please. His film work includes playing Attorney General Herbert Bromnell, speaking to President Eisenhower played by Robin Williams, in The Butler. On television, he was a regular on the daytime serial, Love of Life.

“Aberdeen shines . . he has stage charisma that establishes a rapport with the audience." - Cape May Gazette

Cast of "Provincetown Players": Thomas Raniszewski, Lee O'Connor, Fred Velde, Mark Edward Lang, Alison J. Murphy, and Holly Knapp. Not pictured is Gayle Stahlhuth who took the photo
​THANK YOU EVERYONE FOR A GREAT MARCH!
800 people saw our shows in Cape May & 5 other counties!

As usual, it was a lot of fun directing students at West Cape May Elementary School.  The show was Aesop's Fables and there were two performances: one for the school during the day, and one in the evening, free for the community. Funding through NJTA's "Stages Festival."
Detectives Holmes and Carter was seen twice in Cape May and then traveled to a library in Long Beach Island due to funding from NJTA's "The Stages Festival."
To honor the first modern American theater company, ELTC presented a staged reading of several plays first produced 100 years ago by The Provincetown Players, with a cast of seven.  Partial funding was through "The Stages Festival."


"The Stages Festival" also paid for three admission-free performances of  Robert Aberdeen's Victorian Magic in three different NJ libraries.
Michele LaRue did her bit for Women's History Month (March) with three performances of Somene Must Wash the Dishes: An Anti-Suffrage Satire.
Thank you again Fins Bar & Grille in Cape May for hosting a fundraiser for ELTC that brought in over $2,000.
Thank you, too, to those who have donated funds to help students in Wildwood see a special matinee of Mr. Lincoln.  So far, $408 has been raised, which means that 40 students are good to go!  Further funding donated to this event will help sponsor other students who wish to attend.
Casting for the 2016 Season is almost finished and we look forward to starting up again in May with Mr. Lincoln, and a fundraiser in a beautiful home on the bay!  ELTC's Sally Bingham and Rudy Caporaso have been directing Hamlet with Wildwood students.  The performance is slated for May 5!                                  - Gayle Stahlhuth, Artistic Director (3/27/16)