WHY MARRY? and the Spanish Flu - Artistic Director Gayle Stahlhuth 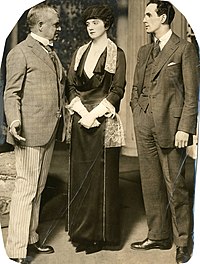 WHY MARRY? 1917
​Why Marry?  ran on Broadway from December 25, 1917 - April 1, 1918, for a total of 120 performances, which was considered a good-run in those days.  Shortly thereafter, the show went on the road.  The tour was shuttered in September 1918, due to the illness of one of its stars, Nat Goodwin. He did not have the flu, but died from cerebral thrombosis in January 1919.
I mention this because of Why Marry?’s timeline.  Now, every pandemic is different, and I’m not judging how one is being handled over another. I’m just looking at the 1918 timeline.
The United States entered World War I on April 6, 1917.  Several people in this country, in March, 1918 came down with a new type of flu – the one that became known as the Spanish Flu.  The origin in this country, might have been from an army base in Kansas, but within 48 hours, there were cases in Queens, NY.  It wasn’t taken seriously – at the time.
On August 11, 1918, ships started entering NYC’s harbor, bringing those with this new form of flu.  The city had the mechanism for disease surveillance, isolation, and quarantine, and began to use it.  But then more ships arrived carrying ill soldiers. Health commissioner Dr. Royal S. Copeland placed the entire Port of New York under quarantine on September 12. The problem was, other East Coast ports were not as strict as quickly.
By September 24, Copeland was worried he wouldn’t be able to isolate everyone who had the flu. There had been approximately 1,000 influenza cases reported, only a small percentage of the city’s 5.6 million, but he knew this was just the beginning.  Copeland asked for $5,000 in emergency funds and the City gave him $25,000.
In early October, NYC’s epidemic ramped up. On October 4, physicians reported 999 new influenza cases for the previous 24-hour period, bringing the total number since the start of the epidemic to approximately 4,000.  Massachusetts – a state with half the population of NYC – had 100,000 cases of the flu by this time.
While many cities were closing businesses, Copeland enacted a staggered schedule for all stores except those selling food and drugs in the hopes of reducing congestion on public transportation. Each of the city’s 46 theaters and movie houses was assigned a specific opening schedule between 7:00 pm and 9:00 pm to spread out the evening crowds.  Several theaters advocated sitting in every other seat, and several closed their shows due to lack of attendance.  The health department began closing theaters that were not well ventilated, still allowed patrons to smoke, and were not as clean as they should be.
By November, New York’s epidemic situation had improved sufficiently for Copeland to announce the disbanding of the Emergency Committee and a return to normal operating hours for businesses. On November 11, the city celebrated the end of the Great War. Mayor Hylan led city employees in a march up Fifth Avenue as onlookers showered them with confetti. Among the marchers were more than 200 men and women from the Department of Health who were applauded by the crowd for their role in ending the epidemic.  There were still cases reported throughout the end of the year, but this strain of flu had pretty much run its course by November 16, in New York City.