SIGN UP FOR OUR CONSTANT CONTACT E-BLASTS
​WE MISS YOU!!  LIVE THEATER IS MEANT TO BE LIVE!

We now have an Equity Contract to present a play on our YouTube Channel,   Safety Practices When We Can Open Live, International Survey,
​Virtual Programming, and Our 40th Anniversary Tape Measures​
​ 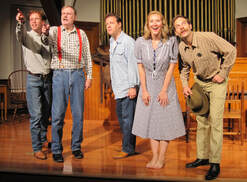 WE'VE REMAINED "OPEN" EVEN WHEN THE SHUTDOWNS BEGAN

We are keeping on top of of what is going on with other theaters and cultural institutions, in the medical profession and in our Cape May Community.

​#CapeMayStrong is a collaborative project of the Chamber of Commerce of Greater Cape May, the City of Cape May, and Cape May Community Partners. The mission is to provide support and guidance for local residents, businesses, and visitors in Cape May, while keeping the community informed as we all navigate the evolving COVID-19 situation. Visit www.capemaystrong.org for updates.​

On May 26 (ironically the same day of its founding in 1913) Actors' Equity Association (AEA) announced that no member may perform in a theater until it is safe to do so.  We at ELTC understand and respect the decision.  AEA is the labor union that represents more than 51,000 professional Actors and Stage Managers, and fosters the art of live theater as an essential component of society.  It advances the careers of its members by negotiating wages, improving working conditions and provides health and pension plans. It is a member of the AFL-CIO and is affiliated with FIA, an international organization of performing arts unions.
So far, Governor Murphy has not allowed small theaters to perform in front of a live indoor audience, and currently, outdoor theater is utilizing non-union performers and crew.
In July, AEA granted contracts to two theaters in Massachusetts and are allowing the Broadway musical Diana to be filmed and aired on Netflix before returning to Broadway in the spring of 2021.
On August 20, AEA granted a 4th contract to a theater in which actors will be working on a set, in costume, with no masks or social distancing. This is for East Lynne Theater Company to rehearse and film Nothing Matters about famous journalist Ambrose Bierce. ELTC's artistic director Gayle Stahlhuth and the Board of Trustees could not be happier. It will be available on ELTC’s YouTube Channel from October 14 - November 21, Wednesdays through Saturdays at 8:00 PM, for $15.
StahIhuth has been working on a plan with AEA since April that would allow the company to film a show if they couldn't present it live. The only reason she sought a contract is because she’s in a unique situation. When the National Tour of The Band's Visit closed in mid-March, James Rana, who has been with this show since the first day rehearsals began for the Broadway run, came to stay with Stahlhuth and her husband, Lee O’Connor, who is ELTC's technical director. She contacted Dave Geible, who wrote Nothing Matters, to see if he could make some revisions in his script, so that Rana and Stahlhuth could perform it. ELTC produced its world premiere in 2000 starring Marty McDonough and Patti Chambers.
One of the things Stahlhuth had to prove to AEA was that she, along with Rana and O’Connor could do everything. Stahlhuth has a small role, and is the director, costumer and set designer. O’Connor is the stage manager, light board operator, and will put up the simple set. When it comes to filming, Rob LeMaire and his friends are setting up the cameras and will be editing.
This back-and-forth negotiating with AEA was frustrating for Stahlhuth. She had to submit ELTC's safety plan first, and then AEA came up with its plan, and kept adding more safety items and details after she’d resubmit the most recent plan. Easily, she spent over 50 hours on paperwork, plus phone calls and Zoom meetings with AEA's Safety Team.
Stahlhuth is a stage director, not a film director, so she’s stepping into a bit of unknown territory, but is willing to face the challenge, and hopes that other theaters will be allowed AEA contracts in the near future. Like AEA, ELTC wants everyone to be safe, but is longing to get back to performing live, indoors, in front of an audience. Theaters everywhere are doing everything they can to bring productions, readings, and workshops to audiences at home, while waiting until they can return to performing in front of a live audience.

We've cancelled all live indoor performances through December 2020.  Should small theaters in New Jersey be allowed to open, we want to be ready to offer live performances in a safe environment.  Season Tickets purchased in 2020 will be honored in 2021.

Technical Director Lee O'Connor researched sprayers/foggers and ordered one recommended by the CDC.  He researched solutions used by these machines that are safe to handle, yet will kill bacteria and viruses on wood and fabric, without doing harm to either.  Cleaning will take place after and before every rehearsal and performance.
To socially distance in our lobby and restroom areas, we will relocate our box office outside when weather allows us to do so.  Volunteers and staff will be required to wear masks and gloves.  We will still have paper tickets for those who reserved tickets but didn't pay in advance, but these tickets will be touched with gloved hands, like our playbills.  Hand sanitizer is available in wall dispensers on both floors.
We require our patrons to wear masks, too.
Our new "Sold Out" will be 60 instead of 120, since social distancing will be maintained for seating. There will be a loss of revenue, but ALL businesses are asked to have fewer patrons, so we're all in the same boat.  Plays will be no longer than 90 minutes with no intermission, since it would be difficult to control social distancing during intermissions.  Only bottled water will be available - no other concessions.
We are prepared to take temperatures when people arrive: actors, staff, volunteers, and audience.  We'll also be asking questions and if the answer is "no" to all of them, then the "questionee" may enter.  These questions are: 1) Have you lost your sense of taste and smell; 2) do you have any unusual shortness of breath or difficulty breathing; and 3) have you knowingly been around a person who has tested positive for COVID-19 during the last two weeks.  If there is one "yes" answer to these questions, then, alas, we'll ask the person to  quietly leave, and hope to see  him/her another time.
​​

ELTC and other theaters in NJ and throughout the country are part of an international study of audience attitudes about theater attendance during and after the Covid-19 crisis, headed up by the research company, WolfBrown. ELTC began sending out surveys via Constant Contact in early June, and we thank you in advance to those who respond to this valuable information. ​
​​

MEASURING SUCCESS ​Back in January, Technical Director Lee O'Connor came up with the idea of small tape measures to commemorate ELTC's 40th Year.  Who knew then, that these handy tape measures would help with Social Distancing!  When we're all together again, we'll be selling these adorable items for only $5.