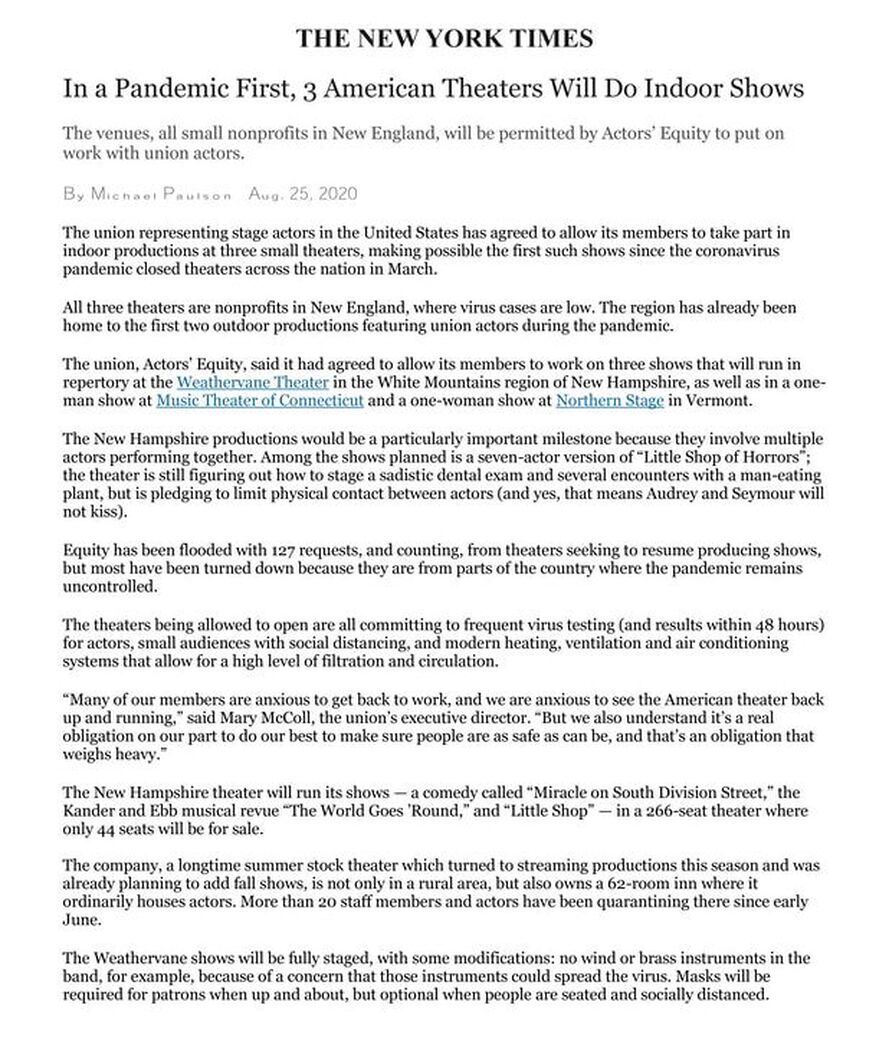 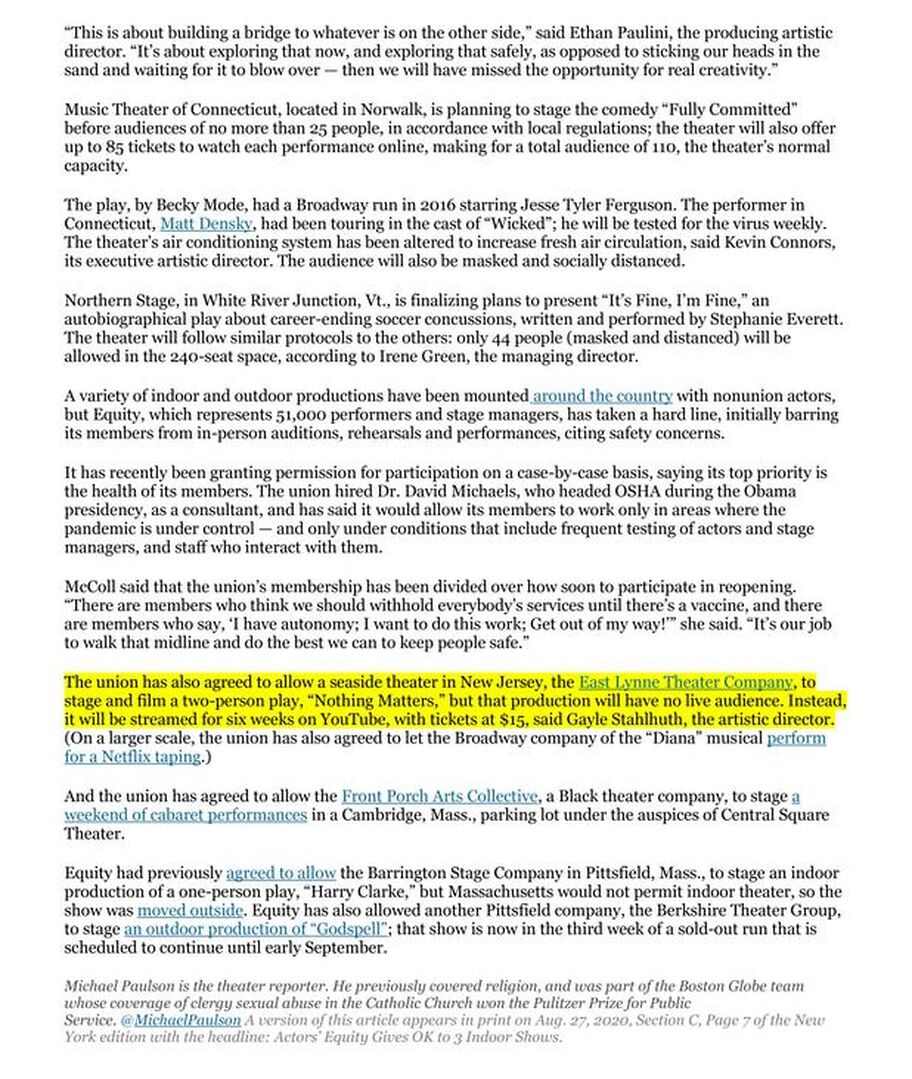 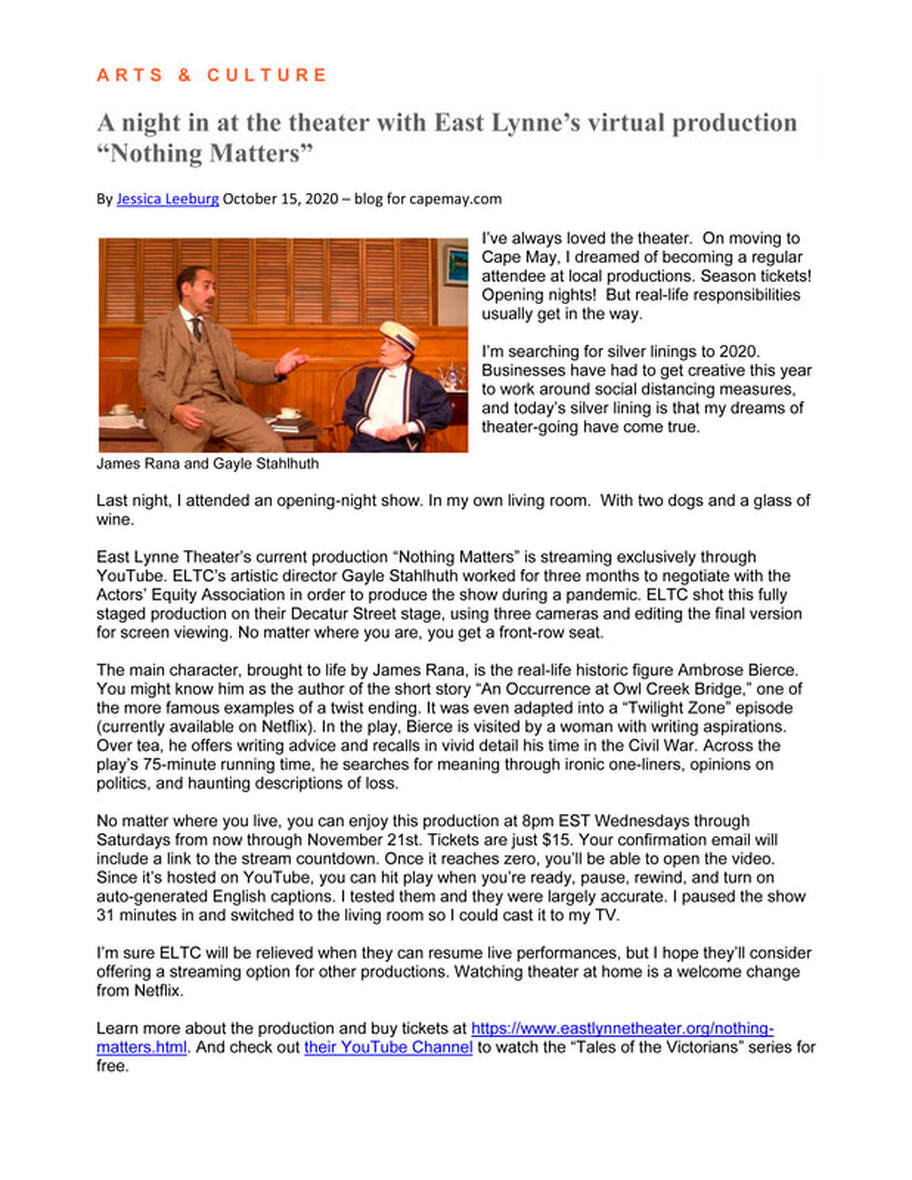 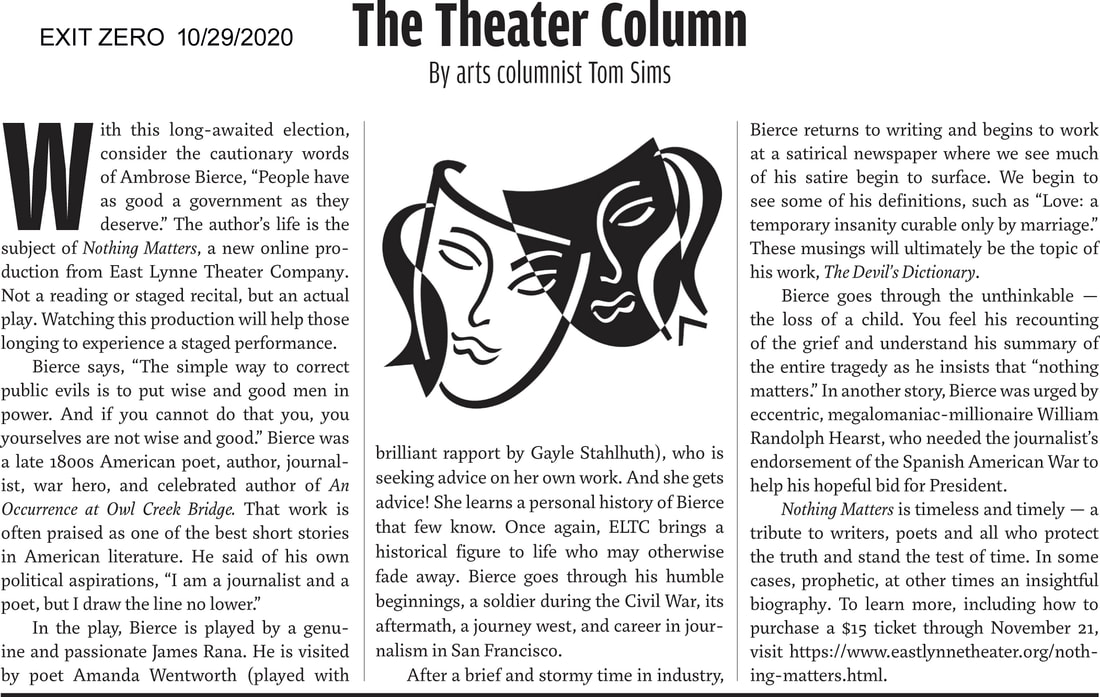 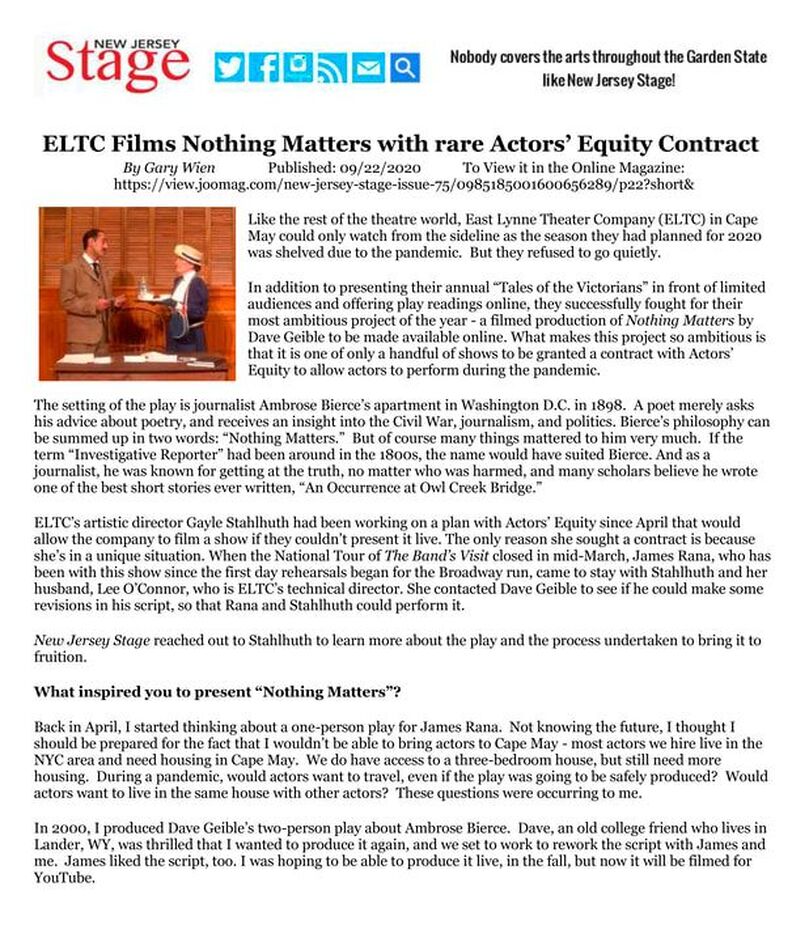 ﻿Review: A 150th-year commemoration of the assassination of 'Mr. Lincoln'
﻿By Howard Shapiro for “Newsworks” and WHYY Public TV and Radio
Actual Link: http://www.newsworks.org/index.php/local/shapiro-on-theater/84025-review-a-150th-commemoration-of-the-assassination-of-mr-lincoln

The first thing you see is the tall man in silhouette. He stands against the altar of the church in Cape May where the East Lynne Theater Company produces, and even without knowing what his face looks like you picture him as a figure of authority. His tall top hat, outlined in the darkness, is his personal exclamation point.
Then the lights come up and right off, Abe Lincoln tells you how he died, it's an unembellished account, more powerful because the facts themselves are strong enough, resonating even though we know them well.
And for the following two hours, the actor Tom Byrn, who resembles Lincoln well enough to appear as credible as the words he speaks, goes through the highlights of the president's life in the late Herbert Mitgang's play "Mr. Lincoln." By reasonable measures, the two-act play could be tighter. But the surprise here is that Byrn, an actor who has done work in Philadelphia and appears a lot at East Lynne, evokes the spirit of Lincoln so well, this "Mr. Lincoln" doesn't lag. It also has the feel of Lincoln's time, with the president's traditional attire by Marion T. Brady and Lincolnesque hair and make-up design by Dave Bova.
In fact, it's staged by East Lynne Theater's artistic director Gayle Stahlhuth to move with a pleasant, leisure beat -- in downtown Cape May, amid all the Victoriana on a summer night, the cadence comes naturally. So does Byrn's portrayal. He gives us a man with huge ideas and ideals, and also common frailties. The performance is, by the end, a tour de force.
Stahlhuth decided to produce "Mr. Lincoln" to commemorate this 150th anniversary of the president's assassination. She remembered seeing the play on Broadway in 1980, which makes her one of the very few who did - it ran 23 performances, including the previews. Stahlhuth says she also remembers that for various reasons, the production didn't work. About 35 years after seeing it, she read the script and decided Broadway had given it short shrift. (It was directed by Peter Coe, who had directed the original version of "Oliver!")
I never saw "Mr. Lincoln" before the other night, so I can't say first-hand what it was like in New York. But I can say that the play is an impressive display of Mitgang's research; I learned a lot. And at East Lynne it has the right actor.﻿ 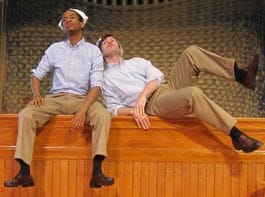 Rodgers, Hammerstein & 'Romance' at the Jersey Shore
by Zoe Miller for The Philadelphia Inquirer (6/10/2016)

That's the game theater patrons will be playing at Rodgers' Romance, a Broadway musical revue created and directed by Philadelphia-area native David-Michael Kenney. On Wednesday, the production will make its New Jersey premiere at Cape May's East Lynne Theater Company, following stagings at the Sellersville Theater (2004) and Ambler's Act II Playhouse (2007).
Comprising 24 songs by Richard Rodgers and his collaborators Oscar Hammerstein II and Lorenz Hart, Kenney's revue invites audience members to guess songs - and their corresponding shows - for a chance to win a gift certificate to a Shore business. Instead of a program, show-goers will be issued entry ballots, where they must list at least 12 song titles to be eligible for a prize.
Although Kenney, better known as DMK, would not list specific production numbers - that would detract from the fun of the guessing game, after all - Rodgers and Hammerstein and Rodgers and Hart respectively penned such hit musicals as The King and I and Pal Joey.
The trivia component reflects Kenney's broader emphasis on the singing voice. Performed sans microphones at the First Presbyterian Church of Cape May, Rodgers' Romance relies on the bare vocal talent of its four performers (Aaron Bell, Patrick Burr, Maggie Johnson, and Clare O'Malley). The show, too, eschews the frills of scenic design and costume changes.
The revue "has production values, but it's not like going to the Academy of Music and watching a Broadway musical, or going to the Arden and watching one of their productions," said Kenney, 58, who studied stage management and directing at Temple University, and has worked in the Philadelphia area for close to 25 years.
He was inspired to compile Rodgers' Romance after seeing The Most Happy Fella on Broadway in the early 1980s - the last show, by his estimate, to be orchestrated without wireless mics.
Charles Gilbert, musical director of Rodgers' Romance and an old colleague of Kenney's - they worked together on an interactive murder mystery for Mobil Oil 30 years ago, among other projects - also appreciates First Presbyterian's unamplified acoustics.
"I've written a couple arrangements for the group to show off the sound of their voices together in the room," Gilbert said. "There are some bits of it that are new to this production. A lot of that was inspired by the sound of the room."
Gilbert, 60, founded UArts' musical theater program, which he led from 1990 until 2008, and has instructed Bell, Johnson, and O'Malley, all UArts alums.
Bell and Johnson graduated in 2015. O'Malley, a Dubliner whom Gilbert first taught in a UArts summer course for teens, is a 2010 grad. (Burr was trained at New York University's Tisch School of the Arts.)
The Philly links have made Cape May feel like home, says Bell, who recently appeared in An Octoroon (Wilma) and Bitter Homes and Gardens  (Bearded Ladies Cabaret) with Johnson. He grew up watching the TV-movie adaptation of Rodgers and Hammerstein's Cinderella starring R&B singer Brandy Norwood.
The racially diverse film sparked his interest in theater.
"It all basically started with that movie, and seeing and hearing the mix of contemporary and classical vocal styles," said Bell, 21, who grew up in Baltimore. Eager to start his career, he graduated from UArts a year early.
For Kenney, who had to propose his revue to the Rodgers and Hammerstein licensing agency to gain music rights, the greatest challenge of Rodgers' Romance was not the mic-less setup but ensuring that he honored the source material while presenting it in a new format.
"You want to do right by the composer," he said. "You don't want to disrespect the music or do it in a less than respectful way."
"Rodgers' Romance" runs from Wednesday to July 23. Performances take place Wednesday through Saturday nights at 8:30 at the First Presbyterian Church of Cape May, 500 Hughes St. Tickets are $17 to $32. More information is available at eastlynnetheater.org or 609-884-5898.