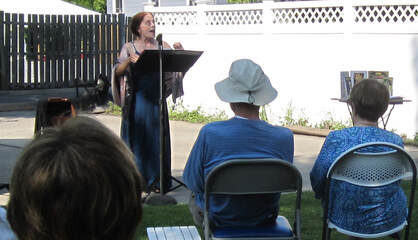 ​TALES OF THE VICTORIANS
Our 33rd Year of a  Storytelling Tradition!
Thursdays at 4:00 during the summer

GETTYSBURG: ONE WOMAN'S WAR
SATURDAY, NOVEMBER 19 at 4:00 PM
The 159 Anniversary of the Gettysburg Address

​Michele LaRue (pictured here) reads two stories from Elsie Singmaster's 1913 collection ​
Gettysburg: ​Stories of the Red Harvest and the Aftermath.
The West Cape May will be revealed when making reservation.
Originally scheduled for outside, it's been moved inside.
Scroll down for Michele's bio.

Photo below: Gayle Stahlhuth performing a TALE at The Dormer House in Cape May, NJ
Photo courtesy of Stephanie Garrett​ 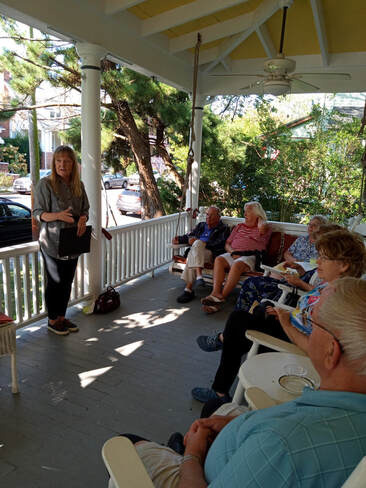 ​OUR PAST 2022 TALES
​
June 16: The Dormer House, 800 Columbia Avenue
Michele LaRue reads "Representing T. A. Buck" written by Edna Ferber, known for novels including
Giant and Show Boat and plays including Dinner at Eight written with George S. Kaufman

June 23: On the Outdoor Stage at The Physick Estate, 1048 Washington St.
Bring your own chair, please.                  Seating is is the shade, and there is a tarp overhead, too.
A little rain is ok, but if it's a heavy rains, Tales will be cancelled.
Stephanie Garrett and Frank Smith will read A Morality Play for the Leisure Class (1920), a one-act by John L. Balderston

June 30: The Harriet Tubman Museum, 632 Lafayette St.
Performer Stephanie Garrett and Frank Smith
Stephanie will read Mary Church Terrell's speech from 1906: “What it Means to be Colored in the Capital of the United States”
Born in 1863, Terrell was a national civil rights activist, suffragist and educator. This speech speaks volumes about "racial progress."
Frank will read "An Adjustment of Nature" by O. Henry.
O. Henry (1862-1910) was born William Sydney Porter in Greensboro, NC. While in prison, he wrote stories using various pseudonyms. For "Whistling Dick's Christmas Stocking," which appeared in “McClure's Magazine” in 1899, he used O. Henry,
and the name stuck.

July 7: On the Outdoor Stage at The Physick Estate, 1048 Washington St.
Bring your own chair, please.                  Seating is in the shade, and there is a tarp overhead, too.
A little rain is ok, but if it's a heavy rain, Tales is cancelled.
Amanda Brinlee and Frank Smith will read A Morality Play for the Leisure Class (1920), a one-act by John L. Balderston
John L. Balderston (1889-1954) was born in Philadelphia.  After graduating from Columbia University, he worked at The Philadelphia Record, The Outlook (in London), and from 1923-1931, was the London correspondent for The New York World.  One of his many assignments included reporting on the opening of King Tut’s tomb in 1922.  Balderston’s and Deane's adaptation of Dracula opened on Broadway in 1927 with Bela Lugosi in the title role.  Balderston wrote the screen version in 1931, with Lugosi, again, as Dracula.  ELTC produced Dracula in 2016, and had previously produced Balderston’s Berkeley Square based on Henry James’ unfinished novel A Sense of the Past.  In it, the hero time-travels between 1928 and 1784. Other Balderston plays include The Genius of the Marne (1919) and Frankenstein  (1932).  He wrote and/or contributed to such movies as Frankenstein, Bride of Frankenstein, The Mummy, Gone with the Wind, and The Prisoner of Zenda.  Balderston was nominated for the Best Screenplay Oscar for Lives of a Bengal Lancer and Gaslight.

​July 28: End of the Road Theater, 3845 Bayshore Road
Tales goes inside!
​Edward R. Murrow's speech at the Radio-Television News Directors Association meeting in 1958, read by Phil Pizzi
Called the "Wires and lights in a box" speech, Murrow blasted the radio and television broadcast industry for its desire to make huge profits, rather than responsible reporting. This speech was called a "bombshell," both inside and outside the industry. TV, already undergoing investigations for quiz show scandals, had been denounced by one of its superstars. 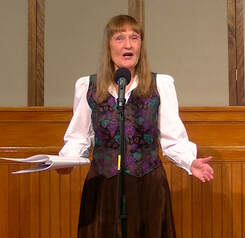 Gayle Stahlhuth
NOT IN CAPE MAY?
​On April 30, 2020, ELTC launched its
TALES OF THE VICTORIANS AT HOME on ELTC's YouTube Channel for free!
Visit  https://www.tinyurl.com/ELTCYouTube​​
Our TALES have been featured on Broadwayworld.com, NJArts.net, and NewJerseyStage.com!

​Amanda Brinlee is a recent graduate of Fairleigh Dickinson University, a small business owner, stage manager, and performer. Since receiving her Bachelors of Arts in Acting in 2020, she performed in ELTC’s virtual reading of Something to Vote For; worked backstage and onstage in Vaudeville Variety, Tales in the Backyard and Poe by Candlelight; assistant stage managed Dorothy Parker: A Certain Woman, and assistant directed The Summer Student Workshop’sThe Reluctant Dragon. When she is not working in theatre, she is running her small business, Amanda Brinlee Designs on Etsy, and raising her daughter.  Amanda would like to thank ELTC and Gayle for this continued opportunity, as well as her husband and the rest of her family for their love and support.

﻿Suzanne Dawson has played leading roles off-Broadway in: CBS Live, The Last Musical Comedy, The Great American Backstage Musical, and the revival of New Faces of ’52.  Her regional credits include Sylvia at Florida Studio Theatre, The Snowball and A Little Night Music at Buffalo Studio Arena, Carnival at The Alliance in Atlanta, and Rumors at Paper Mill Playhouse here in NJ. She toured with Rumors, and opposite Gavin Macleod in Last of the Red Hot Lovers. ELTC shows include: To the Ladies!, Alice on the Edge, The Butter and Egg Man, Berkeley Square, The World of Dorothy Parker, Dulcy, Ruth Draper’s Company of Characters, The Legend of Sleepy Hollow, Zorro!, Arsenic and Old Lace, and Dorothy Parker: A Certain Woman.. Member AEA. ﻿﻿﻿

​Stephanie Garrett  splits her time between Philadelphia, Cape May and Florida.  She played Mary in ELTC's NJ premiere of Jan Buttram's Lost on the Natchez Trace, and also performed in ELTC’s Women and the Vote, Rain, The People of Cape May v. Johan Van Buren, and Christmas in Black and White with Gayle Stahlhuth. She performs regularly for the company’s popular “Tales of the Victorians.” Over fifteen years ago, as a volunteer at Historic Cold Spring Village, she became a storyteller, specializing in early 19th Century Cape May County African American History. Garrett has a BA and MA in Sociology and worked as a Sociologist and Human Resources Manager during her career in Federal Government.  Upon early retirement she received the Meritorious Service Award, the highest award given by the Department of Navy to a civilian employee.  She is past President of the Greater Cape May Historical Society.

﻿Michèle LaRue, Chicago-born and raised, returned to her ancestors’ New Jersey long ago. Her credits with ELTC include William Dean Howells’ Bride Roses, Susan Glaspell’s Suppressed Desires, and Gayle Stahlhuth’s adaptation of Henry James’ The Beast in the Jungle – all directed by her late husband: ELTC's founder and first producing artistic director, Warren Kliewer.  She was also in Langdon Mitchell’s The New York Idea, directed by Stahlhuth.
For over 25 years, LaRue has performed throughout the country in one-woman shows. She makes people laugh with her Someone Must Wash the Dishes: An Anti-Suffrage Satire, written by Marie Jenney Howe in 1912, and directed by Kliewer.  She makes people gasp in her re-imagined version of The Yellow Wallpaper, adapted and originally directed by Kliewer, based on Charlotte Perkins Gilman's 1892 horror story.  She also portrays the Famous First Lady in Eve's Diary, adapted by Stahlhuth, based on the writings of Mark Twain.  AND she's been performing Kliewer's own vibrant poetry about life in the theater, in Places Please, Act One.
LaRue was one of the first to read on porches as part of ELTC's Tales of the Victorians.  Now, under her own title, Tales Well Told, she reads works of Kate Chopin, Mary E. Wilkins Freeman, O. Henry, Dorothy Canfield Fisher, and other American writers, in various venues nationwide. A popular piece is her Gettysburg: One Woman’s War, three stories from Elsie Singmaster's moving 1913 classic book Gettysburg: Stories of the Red Harvest and the Aftermath,
She is a member of the two performers’ unions—Actors’ Equity Association and SAG-AFTRA—and of multiple literature organizations, As a theater editor-writer, she has collaborated on numerous notable publications.

Phil Pizzi has been involved in radio and television production in South Jersey for over 40 years. Currently, he works as a freelance camera operator for 6ABC in Philadelphia and was onsite for the Democratic National Convention of 2016 and the 2015 visit of Pope Francis. Phil hosted the Morning Show on 98.7 The Coast in Wildwood, NJ for ten years. Prior to that, he was Program Manager of the local cable television station in Wildwood, producing TV shows, commercials and a variety of live events. Every summer for over 20 years, he has produced "Jersey Cape Fishing", distributed throughout the Delaware Valley on cable and satellite networks. When not working in the media, Phil has performed in a variety of local shows throughout Cape May, with the Sandpiper Players, Mid Atlantic Center for the Arts, Elaine's Dinner Theater and East Lynne Theater Company. Most recently, he has been assisting Cape May Stage as their Video Projection Manager.

​Frank Smith was a detective with the Philadelphia Police Department before he bought a house in Cape May and turned it into The White Dove Cottage Bed and Breakfast on Hughes Street.  From 1990 until he sold it in 2002, he greeted guests at his B&B and even helped plan events such as family reunions and weddings. From 2003-2007, he was a travel consultant for the Cape May County Chamber of Commerce, and from 2007-2013, a host at Aleathea’s Restaurant at The Inn of Cape May.  From  2014-2020, when the place was sold, he was the  assistant manager of The Henry Sawyer Inn, where he also conducted Murder Mystery Weekends like he did when he ran The White Dove.  Frank was a volunteer for Cape May MAC, portraying “Dr. Physick” from 1992-1997.  He joined ELTC’s board in 1993 and served off-and-on as president from 1996-2016. He also was ELTC’s storyteller on “The Ghosts of Christmas Past Trolley Rides,” co-sponsored with MAC, from 2007-2017, and still sells tickets many nights at ELTC's box office on show nights.

﻿Gayle Stahlhuth ​has performed off-Broadway (Manhattan Theatre Club, etc.), in national tours (Cabaret, Fiddler, etc.), regional theater (Gateway Playhouse in Long Island, etc.), television, and radio. Other work involves directing cabaret shows in NYC, starting a dinner theater in Billings, MT, and creating a Medieval Festival at The Walters Art Gallery in Baltimore. A Year in the Trenches (2017), marked her 100th production for ELTC since becoming artistic director in 1999. As a playwright, her adaptations for ELTC include Tales by Twain, that also ran at Surflight Theatre; Spoon River, based on the famous Anthology by Edgar Lee Masters, The Ransom of Red Chief based on O.Henry's classic tale, and two radio-style scripts: The Adventure of the Norwood Builder and The Adventure of the Red-Headed League. .She’s been awarded commissions from The National Portrait Gallery, the Missouri and Illinois Humanities Councils, and grants from the NJ Humanities Council, the NYS Council on the Arts, and the Mid-Atlantic Foundation for the Arts. For several years, she was a judge for the Emmy Awards in the field of broadcast news. In 2016, she was honored for her work in theater by The National Association of Professional Women (NAPW). Member: AEA, SAG-AFTRA, Dramatists Guild, and NAPW.